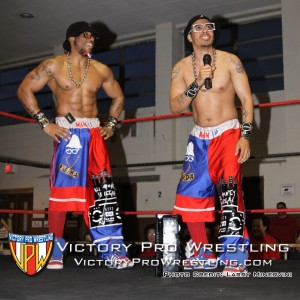 All Money i$ Legal made their thrilling debut in a triple threat tag team match against Amazing Red/Brian XL and Eclipse.  The fans were behind the new team from the Boogy-Down Bronx, although they did not pick up the win.

They did, however, catch up with VPW-TV and had something to say about their future with Victory Pro Wrestling.