Amazing Red made the challenge; can he back it up and beat Kai Katana? 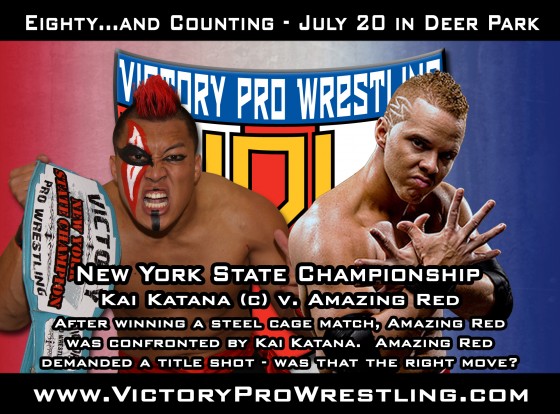 Ricky Reyes looked to settle the score, but Amazing Red was able to pick up the victory in an incredible steel cage match at Upper Limits.

What was supposed to be an emotional celebration with the fans after the match turned into a scary moment when New York State Champion Kai Katana stalked the ring and almost entered the cage.

Amazing Red kept Katana at bay with a steel chair, which didn’t really phase the New York State champion.  As he slowly walked back towards the locker room, Amazing Red challenged him to enter the cage and fight right there and then.

Katana continued to leer into the cage as he backed towards the locker room when Amazing Red made the challenge for the New York State Championship.  The champion stopped, then ran his thumb across his throat, seemingly accepting the challenge.

Amazing Red is an incredible performer, and he’s wrestled talent from around the world.  Katana has just barely passed the one-year-mark of his career and already has shown sign of dominance against tough competitors such as “Firebird” Jorge Santi and “K-Fresh” Kevin Fulton.

Was Amazing Red’s adrenaline after winning the steel cage match taking over his logic when he challenged for the New York State Championship, or does he have the tools to defeat Kai Katana when they meet at “Eighty…and Counting” in Deer Park?