BREAKING NEWS: Graves to challenge for VPW Title Saturday, VsK to make him a believer

Ever since losing the Victory Pro Wrestling championship, a rematch against VsK and a chance to be VPW’s top star once again has eluded “Savior of Wrestling” Kevin Tibbs.

For months, the champion has heard the claims from Tibbs that he wants one more match.  This Saturday, VsK strikes back.

“You see,” VsK tells VictoryProWrestling.com, “no matter how many times I beat him, he keeps wanting more, and he keeps telling his disciples the he is their savior of wrestling.  Call yourself whatever you want, Kevin Tibbs, but I am the VPW heavyweight champion and I have the title to prove it. 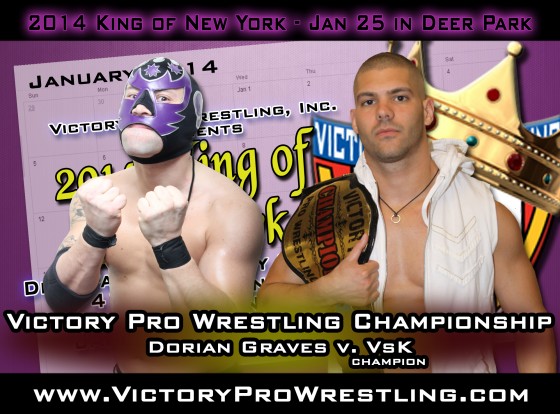 “How about this,” he continues.  “This Saturday at Deer Park at the King of New York tournament, I put my title on the line and prove to your disciple Dorian Graves who the better wrestler is.  I’ll prove to him that your words are just that – words – and that I am the best wrestler in Victory Pro Wrestling today.

“And at the end of the night,” VsK says, “I will make him a believer that Kevin Tibbs is not the savior he claims to be.”

With that, VsK puts the Victory Pro Wrestling championship on the line against Kevin Tibbs’ disciple Dorian Graves at the King of New York tournament.

Comments from the Church of Tibbs were unavailable at this time.

Has VsK bitten off more than he can chew, or will he open the eyes of the masked Dorian Graves this Saturday night when Victory Pro Wrestling returns to Deer Park?

Who will be crowned the 2014 King of New York and face VsK for the Victory Pro Wrestling championship at the 8 year anniversary show?