Can Razzle Dazzle and Super Pogo! overcome the Church of Tibbs at Boiling Point? 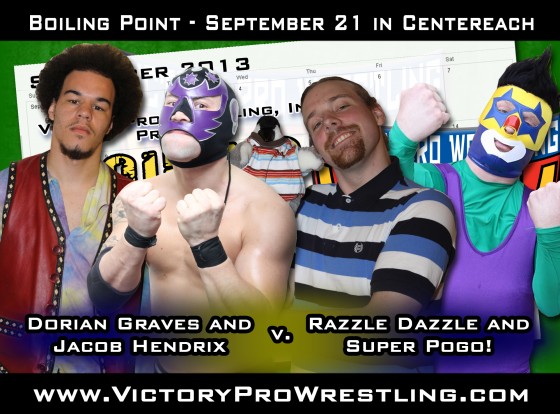 In Super Pogo!’s corner, Mikey Old School, supporting the clowned competitor and motivating him to victory. In Razzle Dazzle’s corner, Grop the Caveman, who seemingly could care less about what was going on in the ring.

A loss for Razzle Dazzle lead to celebration for Super Pogo! and Mikey Old School, and the fans were happy to see the VPW newcomer pick up the win, but it was what happened next that surprised everyone in Deer Park.

The Church of Tibbs came to the ring, with a battered Razzle Dazzle down on the mat. In what looked like a blessing from Kevin Tibbs, the “Savior of Wrestling” unleashed a fury upon the child TV star along with Dorian Graves and Jacob Hendrix.

In a heroic flurry, Super Pogo! ran back to the ring and chased the Church out of the ring. Tibbs sat on one of the guardrails in shock as Super Pogo! and Razzle Dazzle then started dancing in the ring!

Two weeks later in the Gold Rush Rumble, it was Razzle Dazzle in the ring with the Church of Tibbs, and the trio attacked him, tearing his pants off and humiliating him in the ring until Super Pogo!’s music hit.

Before intermission ended, Victory Pro Wrestling management signed a match between the Church of Tibbs team of Dorian Graves and Jacob Hendrix against the NEW Super Best Friends team of Super Pogo! and Razzle Dazzle.

HE’S TOO COOL FOR YOU
Mister O. A. makes his singles debut!

What will happen at Boiling Point?