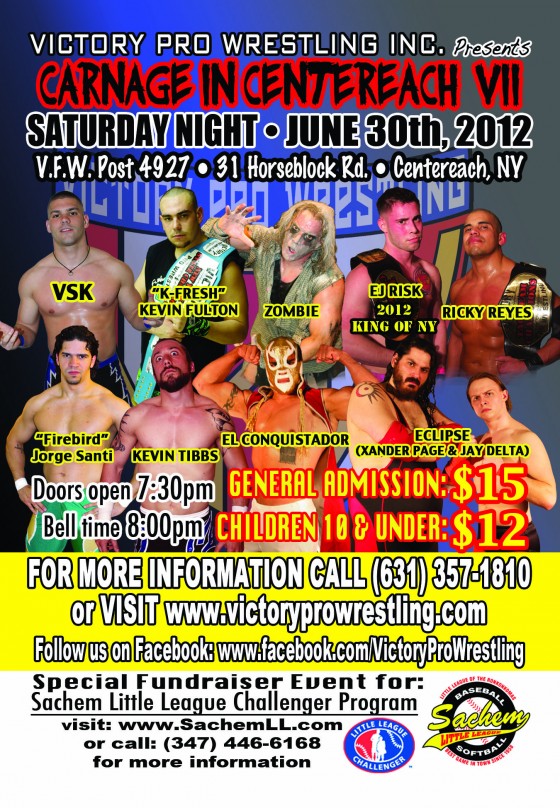 VPW Championship
Kevin “MISTER” Tibbs (c)
vs.
VsK
This match has been brewing for several months ever since Tibbs kicked VsK in the face after they lost the tag team championships at the 6 Year Anniversary Show.  Will VsK show he is the best wrestler in Victory Pro Wrestling, or has Kevin Tibbs truly passed him by?

VPW New York State Championship
“The Heartthrob” Romeo Roselli
vs.
“K-Fresh” Kevin Fulton (c)
“The Heartthrob” returned to Victory Pro Wrestling in May for the first time in two years, and he has his sights on the New York State Championship.  Brutalizing the champion in their first encounter May 19, he said he’d be back for the belt in June.  Will K-Fresh be able to handle a second Roselli beatdown?

Exciting Tag Team Action
Eclipse (Jay Delta/Xander Page)
vs.
All Money i$ Legal (K-Pu$ha/K-Murda)
Da House Party that is All Money i$ Legal crashed the party last month between Amazing Red/Brian XL and Eclipse.  With Red and XL picking up the win, Delta and Page look to take it out on the VPW newcomers.