VPW Commissioner EJ Risk has made a major announcement regarding the Victory Pro Wrestling Championship.

“I told everyone when I took over as VPW Commissioner that they wouldn’t see the same crap,” said Risk.  “I also said that I would be fair to everyone.”

“In the interest of fairness,” he continued, “whether we like it or not, Ricky Reyes never actually lost the belt.”

In December, Reyes defeated Kevin Tibbs to become the Victory Pro Wrestling champion.  In January, Commissioner Risk waived his title shot due to a doctor’s note but told Reyes that he has to defend the title in March against Tibbs and the eventual winner of the 2015 King of New York tournament Kai Katana.

Reyes would not show up in March.  Living to his promise of giving the fans not just what they want, but what they deserve, Commissioner Risk added Jay Delta to represent ConfluxXx and Ricky Reyes to keep the Triple Threat match alive.  Katana would eventually win the championship that night.

When asked about Katana’s status, Commissioner Risk explained to VictoryProWrestling.com, “Listen, I’m not stripping him of the title.  Yes, Ricky never lost the belt.  Yes, Kai won the belt.  But like I said before, I said I would be fair to everyone.  That even includes Ricky Reyes.”

“Therefore, I am giving Ricky Reyes one – and only one – opportunity to regain what he feels is his, the Victory Pro Wrestling championship.  At Upper Limits on June 6, it will be Ricky Reyes and Kai Katana for the VPW Championship.”

At Upper Limits, Ricky Reyes has the task of trying to reclaim a championship he never lost nor defended when he faces Kai Katana in Centereach.  Who does the “championship advantage” favor here?  Can Katana keep his cool and continue to soar, or will Reyes take back what he must feel is rightfully his?

We’ll find out when Victory Pro Wrestling returns to Centereach in June. 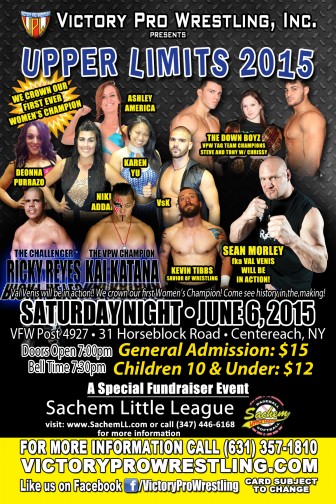