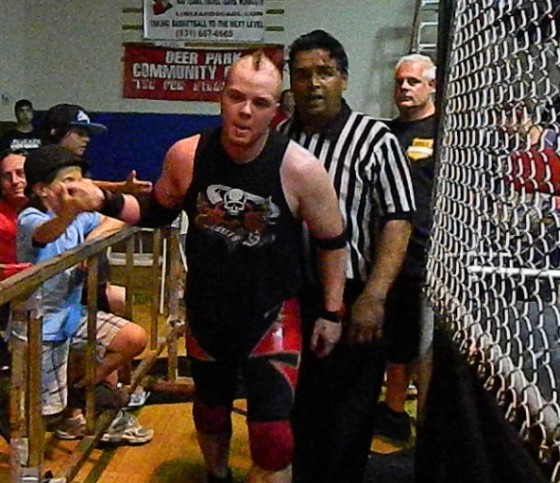 Their rivalry was renewed when Amazing Red ended Ricky Reyes’ quest to become the 2013 King of New York.  It continued throughout the year, to culminate inside the 15-foot high steel cage.

But an amazing win almost turned into something scary after the match.

Dr. Lamar Braxton Porter (w/ Nasty Nate Lecter) def. Super Pogo (w/ Mikey Old School)
“The Adjustment Bureau” came out to cause some pain, but they had to go through the masked “Super Pogo” first. Porter’s attack on Super Pogo’s back must have worked, because just when it looked like Super Pogo may be taking the upper hand, he stumbled from the top turnbuckle, making him easy prey for Porter. 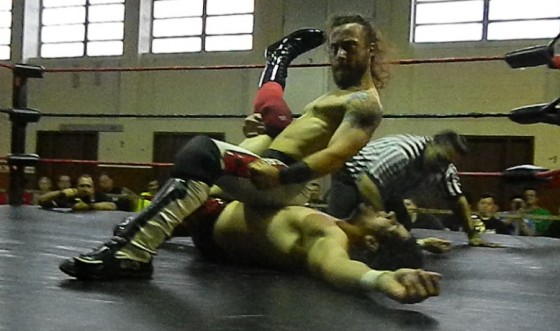 “Savior of Wrestling” Kevin Tibbs (w/ Jacob Hendrix) def. “Firebird” Jorge Santi
Before the match, Tibbs, along with his “Church of Tibbs” disciples Hendrix and Dorian Graves, declared that while they were on losing streaks, tonight would be different as both he and Graves would walk away with wins tonight.  Tibbs made good on his promise, but not without a fight.  Santi, looking as intense as ever, was not going to make it easy.  Inside and outside the ring, Tibbs and Santi battled until a series of kicks and a running knee gave Tibbs the win.

The Jerry Fitzwater Show
Jerry Fitzwater’s guests were Ricky Reyes and King of New York Jay Delta.  He announced that if anyone interfered in tonight’s main event, that they would be ejected from the building and fired from VPW!  Reyes said that tonight, this would be the last time anyone would see Amazing Red.

The focus then turned to Jay Delta, who had the trophy he won at the King of New York tournament this year but not the crown.  Fitzwater presented a gift to Delta, since EJ Risk reclaimed the crown, but Delta snapped the tiara into little pieces and said it wasn’t about the crown, but about the kingdom he controlled.  Then he demanded Brian XL to come down to the ring for a beating.

“King of New York” Jay Delta vs. “Man of Faith” Brian XL
After losing the crown to EJ Risk in May, the “on paper” analysis of how Jay Delta would come back was not good.  But statistics and predictions were proven wrong as the wily King of New York showed a fire we haven’t seen from him since he was one half the the VPW Tag Team Champions.  XL missed his springboard leap of faith from the top rope, setting him up for Delta’s spinning elbow, giving the King the win.

After the match, he declared that he not only wanted to rule as King, but he wanted to challenge VsK for the Victory Pro Wrestling championship next month at “Eighty…and Counting” in Deer Park!

ELIMINATION MATCH FOR THE VPW TAG TEAM CHAMPIONSHIP
Da Hou$e Party (Cooley K/K-MC) (c) def. Super Best Friends (Destructico/Razzle Dazzle) and Tru Talent (Alex Reyes/Mark Quinn)
This match started with a flurry, and Tru Talent was able to clear the ring.  However, they didn’t get a chance to show what they bring to the table as they were quickly eliminated by Destructico and Razzle Dazzle.  Da Hou$e Party showed why they are the tag team champions, taking out Destructico, then hitting a moonsault/swanton bomb combination on Razzle Dazzle to pick up the win.

After the match, Kevin Tibbs came out with Dorian Graves and made the challenge for the titles at the “Eighty…and Counting” show July 20 in Deer Park, which Da Hou$e Party accepted.

Dorian Graves (w/ Jacob Hendrix) def. EJ Risk
The masked disciple of the “Church of Tibbs” was able to beat EJ Risk, but the win was not without controversy. EJ Risk set up his springboard kick, but as he went for the cover, Jacob Hendrix jumped on the apron and distracted the referee.  EJ, seeing this, attempted a springboard kick to Hendrix, who avoided the kick – but not the big right to the face!  Kevin Tibbs came down to ringside, and EJ was ready for him as well, which was enough of a distraction for Graves to roll up EJ for the three.

VPW NEW YORK STATE CHAMPIONSHIP
Kai Katana (c) def. “K-Fresh” Kevin Fulton
When Fulton lost the title, it was hard to watch.  Katana had a fire in him we had never seen before, and he dominated K-Fresh.  This time, Fulton turned things up and gave Katana a fight.  Battling outside the ring, K-Fresh looked like he was going to return the favor, but Katana was able to regain control.  K-Fresh avoided the rear naked choke, but had no counter to Katana’s moonsault, which sealed the victory.

Before the main event, it was announced that in addition to the VPW Tag Team Championship match already signed, that Jillian Hall would be returning to Victory Pro Wrestling, and she would be taking on former TNA Knockout Payton Banks.  It was also announced that VPW Management had signed the match Jay Delta asked for, as it will be Jay Delta facing VsK for the VPW Championship at “Eighty…and Counting” on July 20 in Deer Park! 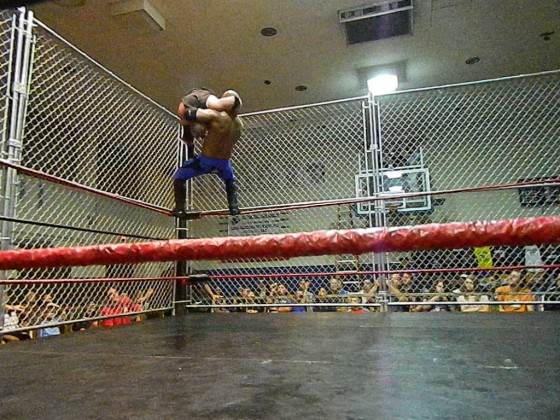 STEEL CAGE MATCH
Amazing Red def. “The Cuban Crippler” Ricky Reyes
Before the match started and the door closed, Ricky Reyes snuck in a steel chair so use during the match.  Once Amazing Red came in and the cage door closed, the two battled to finally settle the score between them.  Amazing Red took to the air as Ricky Reyes tried to keep the attacks grounded.  At one point, Red looked to escape the cage, but Reyes was able to counter with a superplex!

Bringing in the chair proved to be a fatal mistake for Reyes as Amazing Red was able to capitalize from it.  Reyes set the chair in the corner, looking to whip Red in, but a reversal sent Reyes headfirst into the steel chair!  Amazing Red then slammed Reyes onto the metal chair before setting the chair on Ricky’s chest and hitting a vicious double stomp! 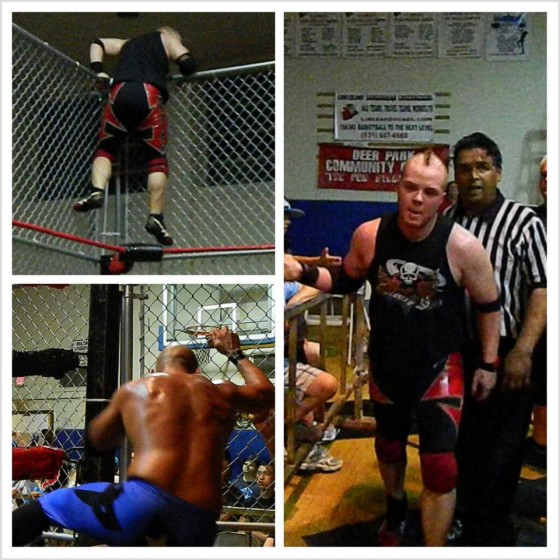 Seeing his opportunity, Amazing Red climbed the corner to make his escape.  Reyes saw this, realized he didn’t have the time to prevent Red from escaping, so he attempted the same by going through the door.  Red was able to hit the floor before Reyes escaped the cage, giving him the win!

Amazing Red went back in the ring to celebrate, but before he had the chance to thank the fans, Kai Katana came do the ring.  Without a word, Katana stalked Amazing Red from the steps.  As he walked back to the locker room, Amazing Red challenged him for the New York State Championship at “Eighty…and Counting” in Deer Park! 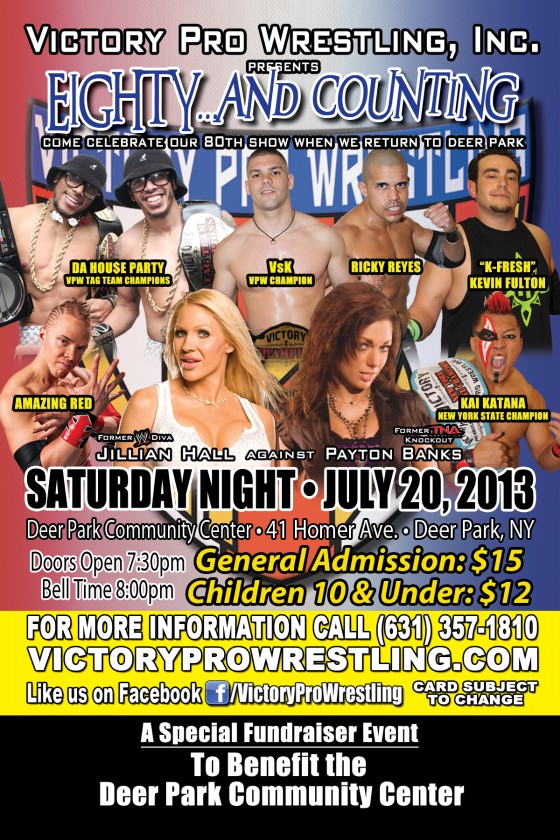