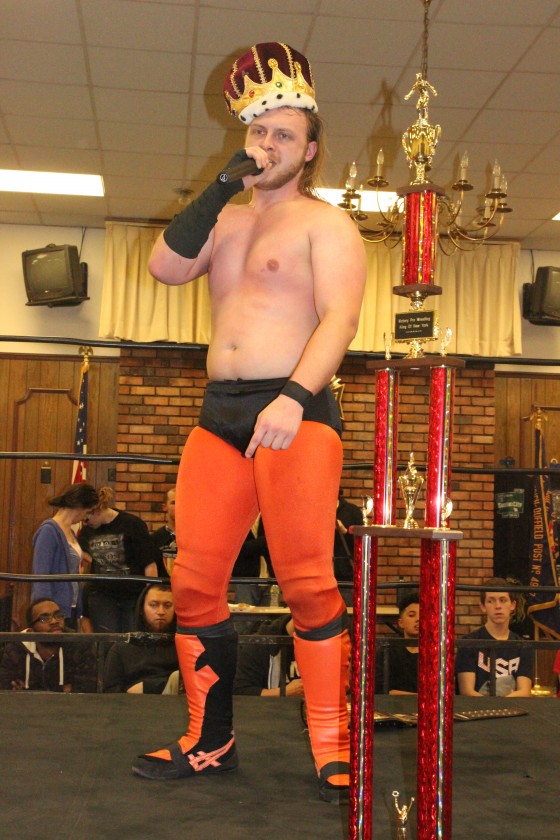 New King Jay Delta captures crown, then challenged Kai Katana for the VPW Championship at Blood Sweat and 10 Years.  Katana accepted, but with a challenge of his own.

It all started with VPW Commissioner EJ Risk coming to the ring to start the show.  After welcoming the fans, he bragged about how the King of New York is his show after rattling off that he won the first two tournaments and made it to the finals three total.  He also noted that his good friend VsK would be defending the New York State championship against Fighter Cat, but the match he was looking at was for the VPW Tag Team Championships.

The Down Boyz came out and expressed their frustration, but quickly demanded the titles be given back to them because Kevin Tibbs had broken his leg and would not be able to compete.  Risk started to consider it, but the Church of Tibbs, with a healthy Kevin Tibbs, came to the ring.  Tibbs told the fans they were going to defend the titles, and that Jacob would be taking Chrissy, the Down Boyz manager, home tonight!

The first contest of the night was a fatal four-way match to determine who would main event for the Crown later in the evening.  Things looked very bad for everyone after Xander Page completely dominated each of his opponents until they all started to work together as a team.  The three of them – Santi, Dazzle, and Delta – piled on top of Page to secure his elimination.  Payback came when Page knocked them all down, and chokeslamming Santi, before leaving.

Dazzle looked to take advantage of this and started to work on the weakened Santi.  On his way to wear Santi down with the Heads, Shoulder, Knees and Toes sequence, Delta clocked him with his tornado forearm to eliminate Dazzle.  Santi provided a fight to Delta, and the two went back and forth.  It was the wiley Delta that scored the victory to advance to the main event.

The second qualifying match was also a four-way elimination match, but this was a four-corners match.  Damian Adams put up a good fight but was the first to be eliminated after a distraction from Fulton on the outside gave Timbershae the opportunity to low blow Adams.  Katana dominated Timbershae and was about to score his elimination when Fulton took over to steal it from the VPW Champion.  Then, Katana and Fulton battled once again – this time for a chance to advance – and with Fulton pulling out all the stops, it was a moonsault from Katana that scored the win.

After the match, Jay Delta stormed the ring and both Delta and Fulton pummeled Katana, wearing him down before the main event later in the night.

The stakes were high for both teams. If the Church of Tibbs lose, they lose the gold.  If the Down Boyz lose, then Chrissy goes home with the Church.  But what was on Jacob’s mind?  Rikishi, who was announced to be VPW’s special guest in March.  Hendrix said he was challenging Rikishi to a dance-off and then decided to show some of his moves.

Once the bell started, it was all business.  The Down Boyz have been one of the more dominant tag teams in recent history since storming VPW, and they were able to take it to Kevin Tibbs, working on his leg, which while not broken was injured prior to the show. The Church came back several times but The Down Boyz refused to go down in defeat.

To help insure the victory, Chrissy pulled out a bag of baby powder and threw it in the face of Dorian Graves… except she missed and it went in the face of Tony!  Jacob then chased after her before she righted her wrong, causing the referee to be distracted. Inside the ring, Steven tried to use the tag title to his advantage but there are two of them, and Kevin Tibbs had the other!  Moments later, the championship was retained and when it was announced that Chrissy was now a member of the Church of Tibbs, the place went crazy!

Fans were excited, the Down Boyz were upset, Chrissy was protesting, and then Jacob kissed her!  It was completely insane with the fans eating it up, seeing Steve and Tony suffer as they had to watch helplessly from ringside.

Deonna Purrazzo made her return to VPW to team up with the VPW Women’s Champion against Karen Yu and VPW newcomer The Terradactyl Terra Calaway. Karen and Terra had a good start, but the champion and Deonna were able to take control.  It was a matter of how long they could dominate Karen, because the sheer size of Terra intimidated Nikki and Deonna, and once she was tagged in, Terra justified it by clearing house!  A distraction by Old School gave Nikki a chance to use overcome Terra, as when the referee took the scarf Old School in the ring out, Nikki’s manager used some kind of spray on Terra, making the Terradactyl easy prey.  Nikki and Deonna scored the win in devious fashion.

Ring Announcer John E Radioo came to the ring and apologized, as he was a little excited about announcing the show’s special guest.  Radioo said of hardcore legend Sandman that he was “literally his biggest fan” which prompted The Grammar Cop to come to the ring with his singing muscle Timbershae.

Grammar Cop berated the announcer after badgering the fans, correcting his grammar and word usage of the term “literally”. He then went back to badgering – this time he badgered Sandman, saying that he slurs his words and does not have proper grasp of the English language.

This prompted the former ECW World Champion to make his way to the ring in rare form.  He grabbed the microphone and went to the fans to ask them what they thought of Grammar Cop.  Grammar Cop took offense to that, again insulting the fans and rambling on.  Radioo then had a suggestion – that since he was already in the ring, and that Sandman was already in the ring, instead of talking, they should just wrestle.  Sandman agreed, saying “He don’t want to fight me.”

Grammar Cop then grabbed his book and wrote a citation.  He shoved it in the chest of Sandman, who just smiled and whacked Grammar Cop in the head with his Singapore Cane.

Fighter Cat earned the right to fight for whatever championship he wanted to by winning the Gold Rush Rumble, and he chose the New York State Championship.  His fight with VsK was intense, as he was able to take it to the champion.  VsK did provide the beating, but Fighter Cat kept clawing back.  He finished him off several times to no avail, which frustrated him.

EJ Risk even got involved, with VsK distracting the referee, connecting with a running knee.  What would have ended it for anyone else was not enough as Fighter Cat surprised everyone by kicking out again! Fighter Cat started to mount an offense and was looking to take the championship away.  EJ Risk distracted the official, and VsK took advantage with a super kick to the back of the head to seal victory.

Kai Katana was not introduced for this match.  He flew to the ring once his music started and launched an assault on Jay Delta, showing a different kind of Katana.  The battle went outside the ring, and Katana went to the locker room area twice to storm back with two rocket clotheslines to knock Delta down.  They continued to fight before going back inside the ring, where Delta took control.

The two battled back and forth trying to regain positioning, unable to pick up victory.  At one point in the match, Delta tried to get the upper hand by using the VPW Championship, but the official prevented that from happening.  Delta took advantage of the distracted official with a low blow, but Katana still kicked out of a roaring elbow.

Katana accidentally knocked the official down while mounting a comeback offense. As Katana checked on the official, Delta grabbed the belt and used it to knock Katana out, then a groggy official counted the three to crown Jay Delta as the 2016 King of New York.

After the match, Delta challenged Katana for his VPW Championship.  On his way to the back, Delta was answered when Katana had a counter offer – Championship versus Crown. 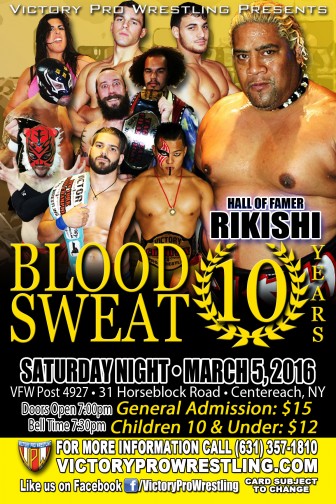 PLUS…
HALL OF FAMER RIKISHI