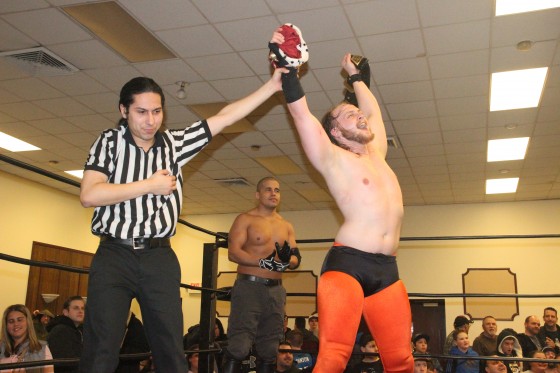 At Blood Sweat and 10 years, Jay Delta wins the VPW Championship and retains the crown of King of New York.

In a standing room only VFW hall, VPW Commissioner EJ Risk started the show with New York State champion VsK and ran down the hot spots for the night, as well as some of the low spots. They talked about how great VPW is, but took all the credit.

Risk then called out Karen Yu and Jorge Santi. Risk let it known he never liked Santi, and that Karen needed to do something to impress him. He decided to make a handicapped match featuring them against VPW Women’s Champion, Razzle Dazzle, and Timbershae.

Despite the odds, Santi and Karen put up a good fight, but the numbers game proved to be too much as the guys as they were able to wear down each other. The match ended when the guys were battling outside the ring, leaving Nikki and Karen inside and Nikki just unleashed a flurry of back hands and kicks that overwhelmed Karen.

After the match, Nikki challenged Karen for one last match at April’s Spring Fever, saying that if Karen can’t win, then she should just leave.

GRAMMAR COP vs XANDER PAGE
Grammar Cop came to the ring and started to trash the fans of Centereach, and then went off on Xander Page. The big monster came from the crowd and manhandled the grammar enforcement official before picking up the iwn.

“SOUTH SHORE OUTLAW” KEVIN FULTON vs DORIAN GRAVES W/ Kristen
In her first appearance since her duties as manager were transferred from the Down Boyz to the Church of Tibbs, Kristen came to the ring to do.. nothing.  Dorian Graves could have use some assistance by her at times, as the South Shore Outlaw represented ConfluxXx in dominant fashion to pick up the win.

After the match, Fulton challenged the Church of Tibbs for a tag team title match at Spring Fever in April, since he just beat one half of the tag team champions.

RICKY REYES vs KEVIN TIBBS
Lucha Underground star and ConfluxXx leader Ricky Reyes clashed once again with the Savior of Wrestling Kevin Tibbs.  The last time these two fought was in the 2015 King of New York tournament, and after that match, they shook hands as a sign of respect.

After a 15 minute showdown, which saw Tibbs pick up the victory, that post match scenario once again came about.  Kevin Fulton came to the ringside area as Reyes was heading to the back, outraged that he would shake Tibbs’ hand, especially now that they would be challenging for the tag titles next month.

SPECIAL CHALLENGE MATCH
JACOB HENDRIX vs RIKISHI
Jacob Hendrix stayed in the ring and started talking all kinds of trash to the fans in Centereach, as well as WWE Hall of Famer Rikishi.  The Big Keesh came to the ring, accepted Hendrix’s challenge, and then proceeded to give Hendrix a well deserved Stinkface.

NEW YORK STATE CHAMPIONSHIP MATCH
NEW YORK STATE CHAMPION VsK
vs TNA IMPACT WRESTLING STAR TYRUS
After trashing Tyrus before the match, it was the Man Dinosaur’s turn to return the favor.  The first thing he would do after being champion would be to clean the title, which upset VsK, the current champion.

The first few minutes of the match, Tyrus just looked like he was having a fun time, tossing VsK around like nothing.  The champion did mount a comeback, but Tyrus was a little too much for him to handle.  EJ Risk then pulled VsK and they went to the back, accepting a count-out loss.

WINNER VIA COUNT OUT: TYRUS (VsK retains the championship)

DOWN BOY STEVEN (w/ Tony) vs FIGHTER CAT
Steven faced the 2015 Gold Rush Rumble champion Fighter Cat in a match that he must have thought would be a cake walk, but that was not the case.  Despite having Tony run interference, Fighter Cat was able to overcome the numbers game and pick up the win.

MAIN EVENT
CROWN vs CHAMPIONSHIP
2016 KING OF NEW YORK JAY DELTA
vs VPW CHAMPION KAI KATANA
ConfluxXx’s Jay Delta against Kai Katana, to highlight the main event of ten years of Victory Pro Wrestling.  The fans were excited to see the back and forth battle between these two.  Delta picked up the win in January, but Katana looked to be en route to returning the favor until Delta whipped Katana into the corner, where referee Steven Dumeng was unable to move from.

ConfluxXx members Kevin Fulton and Ricky Reyes were quick to storm the ring.  Fulton took damage from Katana, but Reyes stayed to the outside, stalking the champion.  This gave Delta the chance to attack Katana from behind and almost pick the win up.

As Katana mounted a comeback and was set to hit his moonsault, Reyes lurked to the ring apron, causing another distraction before being thrown out by the official.  This timing gave Delta enough leverage to move from the flying Katana, and moments later he picked up the win to be the new VPW Champion.

After the match, Delta and Fulton celebrated with an unusually somber Reyes as the fans booed. 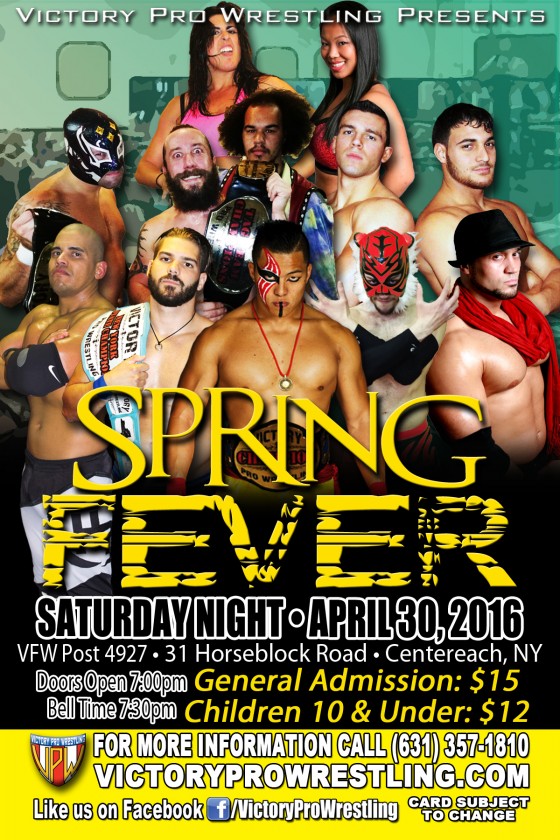