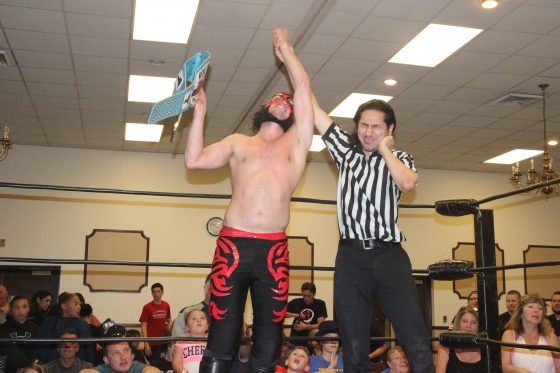 SINGLES MATCH
JORGE SANTI
vs DORIAN GRAVES
Manhattan’s son Jorge Santi showed off a little bit of aggression in his match against Dorian Graves, one we haven’t seen much from him before. Graves and Santi were working a clinic, but the masked Graves looked to have suffered an injury and the referee almost stopped the match until Santi brutally attacked Graves, taking advantage of the injury. While Santi dominated the rest of the contest, it was Graves that overcame and picked up the win.

After the match, Jacob Hendrix came out and verbally attacked Chrissy, or as he called her, “White Girl.” Chrissy had a surprise for Hendrix, and she just attacked him! After he scurried from the ring, Chrissy announced that at Carnage in Centereach August 13, it would be Jacob Hendrix against Chrissy!
ELIMINATION MATCH
NUMBER ONE CONTENDER TO THE VPW CHAMPIONSHIP
TIMBERCHE’
vs RAZZLE DAZZLE
vs KAI KATANA
vs KEVIN TIBBS
The early parts of this match showed some promise, with everyone really giving it their all. Razzle Dazzle, however, was first to be eliminated. After fighting back and almost causing an elimination of his own, Timberche’ was himself eliminated. This left former VPW Champions Kevin Tibbs and Kai Katana. An otherwise main event match tore the house down, but not before Kai Katana connected with his moonsault to become the #1 contender.

After the match, VPW Commissioner EJ Risk came out and trashed the Centereach crowd. He told the fans that VsK would still be New York State Champion at the end of the night, and finally brought out his guest, VPW Champion King Jay Delta.

Delta talked about how he was a great champion, so much that he felt the fans had enough, and he plead to Risk to have the night off.

Delta was getting fired up by Eugene’s rhetoric, and Risk decided why now, so he made the match between Jay Delta and Eugene for the VPW Championship!

VPW CHAMPIONSHIP
*JAY DELTA
vs EUGENE
While Eugene had fun with the official, once it got to business, VPW Champion Jay Delta had a difficult time controlling the match at first. The wiley veteran used every dirty trick he could to regain control but Eugene kept fighting back. The finish, after a Eugene leg drop, Rock Bottom, and People’s Elbow, came when Eugene tried a sunset flip over the top rope.

The referee was oblivious as Delta hung on the ropes for leverage, blocked the flip, and covered Eugene for the three count.

After the match, Eugene wanted to shake Delta’s hand, but instead got a beat down until Kai Katana came out to make the save.
DOWN BOYZ STEVE (w/ TONY)
vs TROY RUSSELL
The Down Boyz were unusually quiet in their entrance, but the fans let them have it anyway. Steve faced the debuting Troy Russell, standing at 6’6″ who really looked to make his mark in VPW. For a big man, Russell really showed agility that usually goes with someone much smaller. His power and skill was not enough to overcome the two-on-one odds as Tony attacked Russell while the official was being distracted which lead to the win.
KEVIN FULTON
vs RICKY REYES
Earlier in the night, Jay Delta said he was offended that Ricky Reyes could think he could just turn his back on ConfluxXx, and that Kevin Fulton would take care of that. This match between former partners didn’t exactly go as he planned, with Reyes being a much tougher customer than Fulton expected. Despite his size and power advantage, Reyes international experience in the ring showed why he is a true ring general as he picked up the win.
VPW WOMENS CHAMPIONSHIP
JAYEL COTTO (w/ MIKEY OLD SCHOOL)
vs NIKKI ADDAMS (w/ MIKEY OLD SCHOOL)
vs *KAREN
Mikey Old School made a beeline to the ring and ran down Karen, saying that this time he was going to make sure the VPW Womens Championship returned to Old School Unlimited and introduced Jayel Cotto to VPW. Nikki and Karen then came out to start the match. It was clear early on that Cotto’s job was to wear down Karen with her mixed style of kicks and wrestling before Nikki would take back her title. Karen eventually eliminated Cotto, and then Nikki poured on the pain, attacking Karen and wearing her down more to try to win the match, but it was Karen who would walk away as champion tonight.

After the match, Cotto and Addams double teamed Karen in a beat down that was broken up by… Grop the Caveman!
NEW YORK STATE CHAMPIONSHIP
*VsK (w/ EJ RISK)
vs FIGHTER CAT
It was a big fight feel for the main event. VsK, the two-time New York State champion, to defend against Fighter Cat, a Gold Rush Rumble champion and the number one contender. VsK dominated the contest with his sheer power. Fighter Cat had to depends on his heart, but at times it just seemed like it was a matter of time before VsK would pick up the win.

However, after every “final blow” from VsK, the challenger would keep fighting back. This started to frustrate the champion, who took advantage of a wrong-place-wrong-time situation for the referee, pulling him in the corner just as Fighter Cat charged for the kill. The champion grabbed his New York State title, with full intent to use it. Fighter Cat kept that from happening, and moments later after a Cat splash, became the new New York State champion!