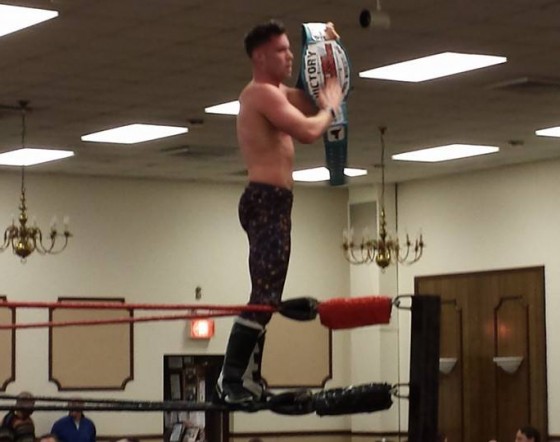 He is a two-time King of New York, a former VPW Tag Team Champion, and a Gold Rush Rumble winner.

The fans were excited before the show even started.  It all started with a blockbuster announcement from VPW ring announcer John E Radioo that at the 8 Year Anniversary Show, Saturday night March 8 in Deer Park, our special guest will be none other than former NWA and TNA World Heavyweight Champion The Phenomenal AJ Styles!

NEW YORK STATE CHAMPIONSHIP
Kai Katana (c) against EJ Risk
In what may have been his last chance to become New York State Champion, EJ Risk fought with a fire unlike in his previous contests with Kai Katana.

Both traded blows and several times Katana had the match won, but with underhanded tactics that the official caught each time.  Risk also pulled out all the stops, giving Katana the fight of his life.

It was all over when Katana hit the moonsault, but somehow Risk kicked out.  Frustrated, Katana went for his high German suplex drop but Risk countered with a Victory roll to pick up the win.

The new champion celebrated in the ring and with the fans after the match, while Kai Katana sat in the aisle, frustrated and surprised that he was no longer champion.

THE BIG KOZ CHALLENGE
Big Koz came to the ring without Mister O.A., but he was still ready to run the Big Koz Challenge.  Slam him, get $500.  He challenged anyone in the back to the challenge, and again, the challenge was answered by Grop the Caveman.

Unlike the last couple of times, Big Koz told Grop to beat it, because he was done giving Grop chances.  Big Koz turned his attention to the fans, as did our cameraman.  This infuriated Big Koz, so he called the cameraman to the challenge.

Unable to slam Big Koz, the cameraman was spared the fate that Grop suffered in the past, and that was a vicious attack and a splash from the 400-pound plus monster.

This wasn’t the end of the night for Grop the Caveman, though.  Jacob Hendrix came out to the ring and called Grop in with him.  He said that they’ve been through a lot together, the Grop and Rock connection, for example.  He looked at Grop and invited him to the Church of Tibbs.

Grop hesitated, then said he would, and went to shake Hendrix’ hand, but was smacked for his troubles.  Hendrix and Grop traded blows and the action spilled outside the ring, but a Hendrix DDT ended the flurry before Hendrix told Grop that he would never be a part of the Church of Tibbs.

Enter: The Savior of Wrestling King Kevin Tibbs.  The 2014 King of New York told his administrative assistant to grab a sign and beat up Grop with it, and that he did.  Tibbs smiled in approval before they went to the back.

“Cuban Crippler” Ricky Reyes against “Man of Faith” Brian XL
Ricky Reyes looked ready for disaster, and Brian XL was the focus of his attack.  XL, however, wasn’t going to make that easy.

In fact, Brian XL showed a fire of his own, a desire to succeed in VPW.  To beat Ricky Reyes.  And tonight, he was prime for victory.

But a surprise appearance from the entire Church of Tibbs, with Kevin Tibbs telling his disciples to attack XL, looked to thwart that.  XL did hold off Dorian Graves and Jacob Hendrix, but with the Church retreating to the locker room, Reyes struck and stole the win from XL.

Earlier in the evening, EJ Risk became New York State Champion.  He was given another chance to celebrate with the fans with an edition of “Risky Business.”

His guests this evening:  Amazing Red and Victory Pro Wrestling champion VsK.  He also mentioned that tonight, “K-Fresh” Kevin Fulton would be in the corner of Red and VsK, and out came his guests.

The fans cheered and they said they would come out on top tonight against the Church, and VsK said that when they met in the ring, the VPW Championship would stay around the waist of VsK.

Before they could get anything else out, the Church of Tibbs came out and made another appearance on the show, with Tibbs saying that someone, tonight, is going to get hurt.

VICTORY PRO WRESTLING TAG TEAM CHAMPIONSHIP
New Super Best Friends (Razzle Dazzle and Super Pogo! w/ Mikey Old School)
against Da Hou$e Party (c) (Cooley K and K-MC)
The match started off between the young team of Dazzle and Pogo! and the championship Hou$e Party with a handshake and signs of goodwill.  Once the match got underway, both teams put a good effort against each other.

After intermission, the ring announcer was getting everyone excited for the main event, but was cut off by Ricky Reyes.  Reyes talked about his match earlier in the night and stated that ConfluxXx was not dead.  He said that he noticed EJ Risk is the New York State Champion, stating that the reign will be a short one because Reyes is setting his sights on the target Risk now has on his back.

That’s when the Firebird Jorge Santi came out and told Ricky that if he tells him to shut up, it won’t mean anything.  So Santi got all the fans to shout a loud “Shut up!” to the Cuban Crippler.  Santi they challenged Reyes to a match right there and then, and Reyes hesitated but agreed to the match!

“The Cuban Crippler” Ricky Reyes against “Firebird” Jorge Santi
Reyes looked to finish off Santi quickly, but was unable to.  Santi and Reyes went back and forth in a great, but close, match.

Reyes looked to finish off Santi but it was the Firebird who picked up the win.

Frustrated, after the match Reyes said that while he wants EJ Risk, at the anniversary show in Deer Park in March, he wants to beat up Santi and avenge his loss tonight.

MAIN EVENT
The Church of Tibbs (King of New York Kevin Tibbs and Dorian Graves)
against VPW Champion VsK and Amazing Red
Coming to the ring for the Church of Tibbs was Jacob Hendrix, and for Amazing Red and VsK was “K-Fresh” Kevin Fulton.  Both would play a factor in the match.

With the fire and fury of the Church of Tibbs, VsK and Amazing Red were in for a fight.  Hendrix was able to distract the referee when it looked like the Church was going down, but Fulton decked him for his trouble.

With the fight going on, it looked again like Amazing Red was on fire, and Jacob Hendrix caused yet another distraction.  This time it was Red with the fun, attacking Hendrix.

Amazing Red and VsK traded kicks on Dorian Graves before Red picked up the win.

After the match, Fulton joined Red and VsK in the ring to celebrate, but Tibbs connected with a series of low blows before Graves and Hendrix joined in the attack.

Then they set their sights on Amazing Red, with his leg being a target.  Dorian Graves wore Red’s ankle down with an ankle lock, before Hendrix tore into Red’s leg with a leg-DDT.

Tibbs then said he didn’t care if it was for the VPW title against VsK or AJ Styles himself, he didn’t care.  He would be VPW champion again, and he would be victorious at the anniversary show.

Plus…
The Phenomenal AJ Styles