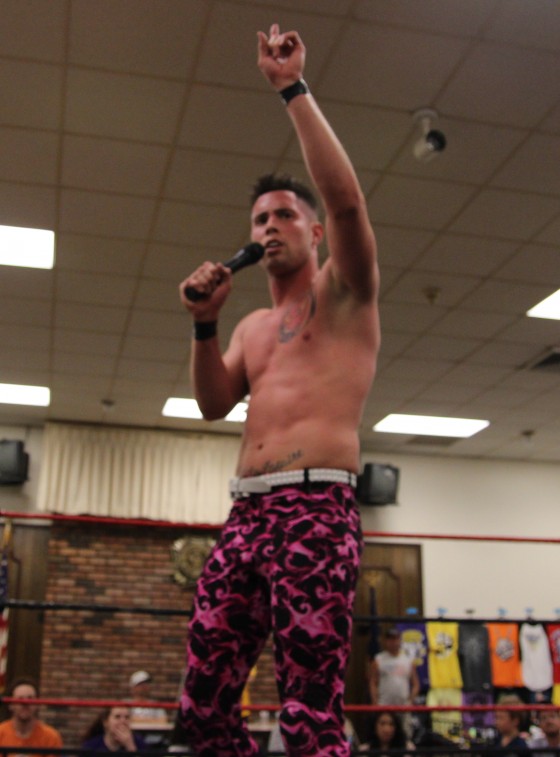 EJ Risk had the chance of being a three-time King of New York but lost in the finals to former ConfluxXx partner Jay Delta.  Several months later, he was able to take the crown from Delta in a ladder match, symbolically becoming King of New York.

Last night, EJ Risk climbed over another hurdle by overcoming 19 other wrestlers in two grueling matches to become the 2012 Gold Rush Rumble winner, challenging Kay Katana for the New York State Championship in what turned into a locker room clearing brawl after the show.

The show started off with ConfluxXx coming to the ring.  “The Cuban Crippler” Ricky Reyes announced to the fans that his partner Jay Delta, who was in the ring with him, suffered a broken jaw in his championship match last month.  Despite that, Ricky said, Delta was still able to show up to Centereach.  Meanwhile, his opponent. Victory Pro Wrestling champion VsK, did not.

Saying he felt he was robbed, Reyes said that at Boiling Point he would get his title shot against VsK, and that later on in the evening he would win the Gold Rush Rumble.

GRUDGE MATCH
“K-Fresh” Kevin Fulton def. Jason Static
Before the match started, Static ran down K-Fresh, calling him fat and out of shape.  He said that he held the VPW championship for over 700 days, and that after he won the Gold Rush Rumble, he would hold it for another 700.

K-Fresh did his talking in the ring, frustrating the former champion after Static kept trying to finish him off, with Fulton kicking out of everything he had.  After firing back, K-Fresh charged out the corner with a lariat to seal the win.

First, the rules:
Two wrestlers start the match.  Every 90 seconds another VPW wrestling comes to the ring.  Wrestlers would be eliminated once they were thrown over the top rope and both feet touch the floor.  The Rumble ends when there are four wrestlers left, who then go on to finish in the main event to determine the winner.

Special notes from the Rumble:
• Kevin Tibbs lasted the longest in the Gold Rush Rumble, drawing the #4 spot and making it to the finals.
• For the first time in Gold Rush Rumble history, the microphone was used as a weapon.  Jerry Fitzwater, singing his theme song, had the mic taken from him by EJ Risk, who used it on four different opponents.
• Mr O.A. made his Victory Pro Wrestling debut in this year’s Gold Rush Rumble.
• Without Jay Delta, Johnny “Muscles” Marinara, VsK, and Xander Page, the list of competitors to have been in every single Gold Rush Rumble is now down to Kevin Tibbs and Mikey Old School.

Grop the Caveman took a beating when he hit the floor, leaving Reyes,Tibbs, Risk, and Amazing Red as the final four competitors to go on later in the evening to find out who would win the fatal fourway elimination match and become the Gold Rush Rumble winner.

NEW YORK STATE CHAMPIONSHIP
Kai Katana (c) def. “Man of Faith” Brian XL and “Firebird” Jorge Santi
This match was one fall to a finish.  Santi and XL double teamed the champion early on, but when XL tried to score the win, Santi pulled him off and went for the cover himself.  XL didn’t take to kind to that and returned the favor.  This breakdown led to Katana coming back and picking up the win. 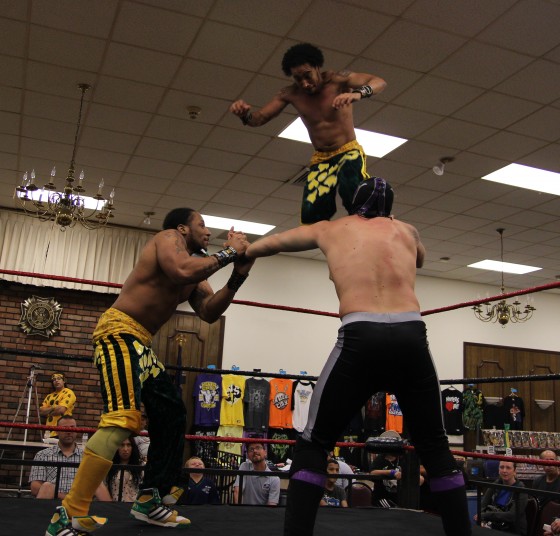 VPW TAG TEAM CHAMPIONSHIP
Da Hou$e Party (c) (Cooley-K and K-MC) def. The Church of Tibbs (Jacob Hendrix and Dorian Graves)
Cutting intermission short, “Savior of Wrestling” Kevin Tibbs came out to the ring with his disciples, demanding a tag team championship match right there and then.  Saying it was time for him to have gold, it would be Dorian Graves earning his first championship with… Jacob Hendrix.  Tibbs then left the ring, saying he had “bigger fish to fry” later that night.

The challenge was accepted, and with Da Hou$e Party in the ring, it was time for a party!  The fans supported the champions, who tried to get a hold of Hendrix several times.  The cunning leadership of Tibbs seemed to have trickled down to his disciples as Graves and Hendrix were able to come back and even give the champions a run.  With the Church looking to get their first championship win together, Razzle Dazzle and Super Pogo! came down to ringside, caused a distraction, and gave the fans a reason to celebrate with Da Hou$e Party.

GOLD RUSH RUMBLE FATAL FOURWAY
EJ Risk def. Kevin Tibbs, Ricky Reyes, and Amazing Red
Amazing Red was first to be eliminated, but several times it looked like it would be Tibbs that would be the first to go.  All four battled it out, but Tibbs finally picked up the first fall eliminating Amazing Red.  This left Tibbs, Risk, and Reyes in the ring.  Tibbs suggested to Reyes that they work together to beat EJ Risk.  Reyes had other plans, suggesting to Risk that they team up again, like they did during ConfluxXx, and beat down Tibbs.

EJ looked to agree with that, and as Tibbs kneeled down to accept his beating, Risk turned on Reyes and beat him down until “The Cuban Crippler” rolled out the ring, leaving Risk and Tibbs, who was still on his knees, in the ring.  Thinking it was Reyes, Tibbs was shocked when he saw at the other end of the ring was an angry Risk.

The three battled back and forth until Reyes was finally pinned by EJ Risk.  Flashbacks of the 2011 and 2012 King of New York tournament came back, as Risk and Tibbs met in the finals once again, this time for a chance to become the Gold Rush Rumble winner.

The two did not show any signs of fatigue, battling with a new hunger, but a springboard kick connected, and EJ Risk pinned Tibbs to become the 2013 Gold Rush Rumble winner.

EJ Risk then declared once again that he would go after the New York State Championship.  Kai Katana then rushed to the ring and attacked EJ Risk, which led to the locker room clearing and all the VPW superstars standing between Risk and Katana to end the show.

What will happen at Boiling Point?