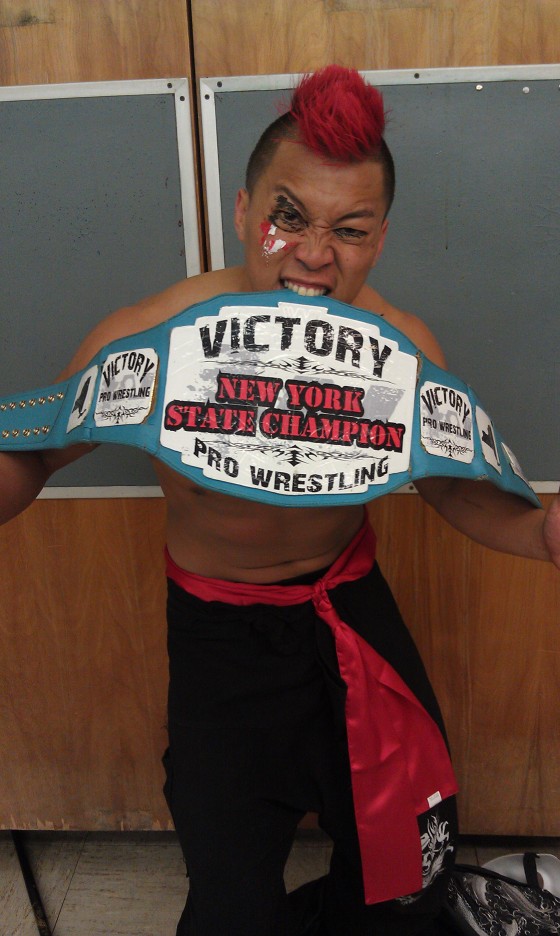 Dark skies and light drizzle didn’t keep the fans from coming to Deer Park to see Victory Pro Wrestling’s “Fans Choice” show, and those in attendance witnessed history in the making.

The New York State championship changed hands, and EJ Risk was able to take back his crown and once again become King of New York!

It all started with a four-way elimination match to determine the new Number 1 contender for the New York State championship featuring four stars that the fans chose to participate.

FANS CHOICE – FATAL FOURWAY ELIMINATION MATCH
NUMBER 1 CONTENDER FOR THE NEW YORK STATE CHAMPIONSHIP
“Firebird” Jorge Santi d. Dorian Graves (w/ Kevin MISTER Tibbs and Jacob Hendrix), “Cuban Crippler” Ricky Reyes, and Amazing Red
In an amazing match to start things off, “The Firebird” was able to pin Ricky Reyes for the first elimination.  Hesitant to go to the back, Reyes stuck around, and that caused enough of a distraction to give Dorian Graves a pinfall win over Amazing Red.  This left the masked newcomer and Manhattan’s finest in the ring to battle it out, with the experience of Santi giving him the win and the top spot in the New York State Championship rankings.

Dr. Lamar Braxton Porter def. Johnny Armani (w/ Mikey Old School)
In a match pitting pure power against wrestling finesse, Armani wasn’t able to pull off the win, though he did try to pick up the 301 pound Porter up several times.  After finally slamming Porter, his energy was just sapped, and the doctor was in as Porter devastated Armani with a vicious back breaker for the win.

FANS CHOICE – VICTORY PRO WRESTLING TAG TEAM CHAMPIONSHIPS
Da Hou$e Party (c) def. Destructico and Razzle Dazzle
After reviewing all the ballots, Razzle Dazzle and Destructico had enough votes to win another chance at the VPW Tag Team Titles.  The way they worked in the ring together at the Fans Choice show was a lot more organized, and the two seemed to gel together more, but it was the tag team experience that Cooley K and K-MC brought to the ring that helped them pick up the win.

Jillian Hall def. Jessie “Bonesaw” Brooks
Before her match, Jillian Hall declared that she wasn’t there to sing, but to wrestle, and that she was going to stay in Victory Pro Wrestling until they could find someone to beat her.  That’s when she called out her opponent, Brooklyn’s own Jessie Brooks.  She was able to hold her own against the former WWE Divas champion, but it was Jillian’s experience that gave her the win.

FANS CHOICE – NEW YORK STATE CHAMPIONSHIP
Kai Katana def. “K-Fresh” Kevin Fulton (c)
New champion!
“Firebird” Jorge Santi must have been watching this match from the locker room to see who he would be facing at the June 8 “Carnage in Centereach VIII” show.  K-Fresh was the first wrestler to pin Kai Katana.  He was able to fight off Katana at the “Spring Fever” show.  But at “Fans Choice”, Katana finally picked up the win, dethroning the longest reigning New York State Champion.  The champion was manhandled in this match, unable to stop the force that kept coming at him.  Katana looked to have a new drive, and that drive brought out a new finisher, a version of a rear naked choke, to smother K-Fresh to the point where the referee called for the match.

After Katana walked to the back with the title clenched in his teeth, “The Heartthrob” Romeo Roselli came out with a microphone in hand, saying that he wasn’t there to beat K-Fresh down, but to announce that he was the most missed VPW wrestler.  He then challenged K-Fresh to a match at “Carnage in Centereach VIII”, saying that he was going to end “K-Fresh”.  The former New York State champion finally rose to his feet, only to get torn down by a vicious clothesline from Roselli.

RISKY BUSINESS
EJ Risk’s guest was VsK, and in the ring they declared that tonight was a big night for both of them.  EJ was going to get an opportunity to become King of New York again after winning his match against Jay Delta, and VsK would defeat Kevin MISTER Tibbs to retain the VPW Championship, but then EJ asked the fans if they’d want to make VsK’s match a hardcore match.

With the fans cheering loudly, EJ and VsK talked about how together, the two of them were franchise players.  This brought out former ECW legend “The Franchise” Shane Douglas.  Douglas came to the ring, thanked the fans for coming out, and then said that he was sick and tired of the wrestling business, thanks to the likes of the Vince McMahons and the Dixie Carters.  But with the way fans kept coming in, and with the arena crew having to bring more chairs out to seat the new fans, he saw something different in VPW, leading the fans to a VPW chant and thanking them again for supporting independent wrestling.

FANS CHOICE – VICTORY PRO WRESTLING CHAMPIONSHIP
HARDCORE MATCH – ANYTHING GOES
VsK (c) def. Kevin MISTER Tibbs (w/ Jacob Hendrix and Dorian Graves)
After the introductions, a VsK super kick knocked down Kevin MISTER Tibbs.  Graves and Hendrix then attacked the VPW champion, but the referee threw them out of the arena.  The match quickly spilled outside, with VsK and Tibbs battling outside the ring, by the concessions, and almost out of the building!  With the fans on their feet, the two kept going back and forth, with Tibbs unable to figure out VsK.  With chairs and signs, including one from a fan at ringside, the VPW champion set up Tibbs on the top turnbuckle, looking for a belly to back superplex.  Knowing that would be the end, Tibbs kept fighting off, but a super back cracker gave VsK enough to pick up the win and retain the championship.

FANS CHOICE – LADDER MATCH FOR THE CROWN OF NEW YORK
EJ Risk def. King of New York Jay Delta
New King!
EJ Risk lost the finals to the King of New York tournament to Jay Delta.  At the Anniversary Show, he lost again to Delta.  This time, with the crown 20 feet above the ring, he was not going to let history repeat itself.  Using the ladder not at a tool to get the title, but as a weapon, Risk was able to put Delta down and out, but not enough to win the match.  Inches away from finally taking the crown, Delta was able to backflip EJ 15 feet down onto another ladder!

Even Shane Douglas was in awe to see what happened next, with Risk somehow finding the energy to climb up the match and hit a neckbreaker!  But as he climbed to the top to capture the crown, ConfluxXx leader Ricky Reyes came back to the ring to help Delta.  Amazing Red was right behind him, though.  Unable to interfere, Risk unclasped the crown and once again is the King of New York!