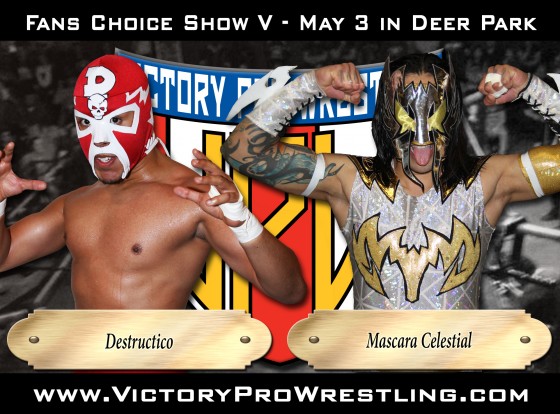 In his Victory Pro Wrestling debut at Blood Sweat & 8 Years, Mascara Celestial picked up the win against Destructico.

At Spring Fever 2014, Destructico attacked Mascara Celestial and Mikey OldSchool after his match and told him that he was upset that he was making his return to VPW only to lose to Celestial.

Destructico issued a challenge for Fans Choice Show V, Saturday night May 3 in Deer Park, demanding respect and telling Mascara Celestial and the VPW fans that he would get his retribution.

Destructico’s frustrations are not new to VPW against lucha wrestlers.  He feuded with El Conquistador and in singles competition, was never able to beat him.

Will the story be the same for Destructico with Mascara Celestial, or will he find a way to overcome the speed and agility of Mexico City’s flashy export?