New King crowned by Risk: Says he will take crown himself! 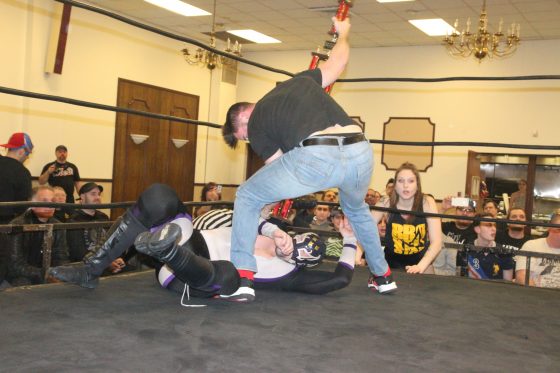 In what can only be described as a jealous and heinous act, VPW Commissioner EJ Risk brutally attacked Dorian Graves just moments after Graves defeated VsK in the 2017 King of New York finals.  Shortly after the attack, Risk declared that he would reclaim the crown himself at the Blood Sweat and 11 Year anniversary show in March.

MATCH #2
“Firebird” Jorge Santi vs Jay Delta vs Cooley K
The returning Cooley K shocked the fans and his opponents with his return and picked up the win to advance.  After the match, Santi attacked him in a sign of disrespect.

MATCH #3
“South Shore Outlaw” Kevin Fulton vs Dorian Graves vs Fighter Cat vs Howie Timberche
Things got brutal for Fighter Cat and Fulton as they brawled to the locker room area during the match, leaving Timberche singing the blues and Graves advancing.

MATCH #4
Romeo Roselli vs Damian Adams vs Razzle Dazzle (w/ Mikey Old School and Nikki Addams)
After attempting a double clothesline, Razzle threw himself out of the match, leaving Roselli and Adams to battle.  Adams defeated the former Heartthrob for the final spot in the second round.

MIXED TAG MATCH
Down Boyz Tony & Nikki Addams (w/ Mikey Old School)
vs “Savior of Wrestling” Kevin Tibbs & Krissy
There was no love lost between Tibbs and Tony.  Tony set up Krissy in the electric chair for what would normally be Steve and a top rope drop kick.  As Nikki climbed the corner, Tibbs knocked her off.  Krissy escaped the chair and set up Tony for a Tibbs double stomp and the win.

MATCH #1
Damian Adams vs Dorian Graves
Adams has years of wrestling experience on Graves, but he’s also a chip on the shoulder of Romeo Roselli, who came out to the ring and distracted the official after Adams connected with a flying neckbreaker.  This gave Graves a chance to recover and advance into the finals.

MATCH#2
VsK (w/ EJ Risk) vs Cooley K
Fresh from an attack from Santi, Cooley K still rose to the occasion to become a finalist, but Risk distracted the official and caused enough distractions allowing VsK to seal the win away.

VPW WOMENS CHAMPIONSHIP
Nodi (w/ Mikey Old School) vs Karen Q (c)
Old School claimed to travel the world and found the naughtiest woman to take the belt from Karen in the South Central Armenian.  Nodi did a lot of trash talking to back up the beating she delivered, but in the end it was Karen to retain the title and use the #ANDSTILL hash tag to describe her win.

2017 KING OF NEW YORK FINALS
VsK (w/ EJ Risk)
vs Dorian Graves (w/ Kevin Tibbs & Krissy)
VsK has won every VPW Championship.  He’s won the Gold Rush Rumble.  He conquered the steel cage on more than one occasion.  The one accolade that has eluded him was the King of New York.  Knowing VsK and EJ Risk would stop at nothing and cross any line needed to change that, Tibbs decided it would be best to support his tag partner at ringside.

In a classic 20 minute main event, VsK brutalized Graves but was unable to pick up the win.  Time after time, VsK came closer and closer to victory and things looked bleaker for the masked Apostle from the Church of Tibbs.  Failing to put Graves away started to frustrate VsK.  Risk attempted to get involved, but that ended up in a fight outside the ring as he and Tibbs battled.  This gave Dorian Graves the chance he needed to connect with a flying headbutt and become the 2017 King of New York.

Risk and VsK turned a celebration into a disaster.  As the Church was celebrating the victory, they were attacked from behind.  Risk used the trophy as a weapon, beating and choking both Graves and Tibbs with it before VsK destroyed the trophy.

Risk then declared that at the Blood Sweat and 11 Year anniversary show, he would challenge Dorian Graves and take back what he feels is rightfully his, the King of New York. 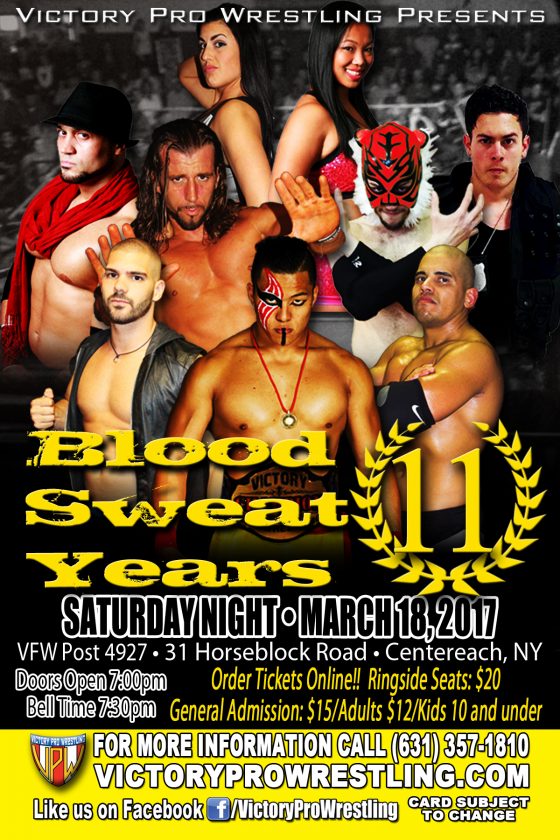