Full results are in from our Night of Charities Show!

In front of yet another sell-out crowd in Deer Park, Victory Pro Wrestling pulled out all the stops with events that nobody could have ever foreseen!

After the match ended, VsK grabbed the mic and called out Kevin Tibbs. VsK clearly wanted an explanation for Kevin’s recent actions. Kevin did not come out so VsK said he was heading backstage to find him.

The Jerry Fitzwater Show
Fitzwater came out singing along with his caveman sidekick Grop. His guest was Kevin Tibbs. It was clear that Kevin was going to be picking his spots since he ignored VsK’s request only moments earlier. For the first time in his career, Kevin was met with a mixed reaction from the fans.

That mixed reaction quickly turned into a completely negative reaction as Kevin appeared to completely lose it. He went on a tirade blaming VsK for all of his recent misfortunes. Whether he was justified or not doesn’t matter as he was clearly beyond reason. Kevin then addressed the fans and told them that he felt they never appreciated him, and that from here forward he would be recognized as Mr. Tibbs.

VsK must have had enough as he started to make his way down the aisle. Trying to keep things from further escalating, “K-Fresh” Kevin Fulton cut VsK off and tried to calm him down, saying that he’ll talk to Kevin and fix everything. Cooler heads prevailed and VsK returned to the back.

Mr. Tibbs d. “Firebird” Jorge Santi
With Mr. Tibbs already in the ring, he called out his scheduled opponent for their match. Santi came out like the firebird that he is, but Mr. Tibbs’ angst and ability was too much to overcome.

Nick Noshus d. Razzle Dazzle (w/ Jacob Hendrix) by DQ
Issues between both men have been festering for months with neither achieving satisfaction over the other. On this night, Noshus earned a sense of vindication, but the victory was not without controversy. Thanks to an unexpected attack by the VPW Tag Team Champions, Ricky Reyes and E.J. Risk, Noshus won by disqualification.

Noshus got out of harms way and took the mic from the ring announcer with the purpose of challenging Risk to a match on May 11, 2012. Risk accepted.

VPW Tag Team Championship
“Cuban Crippler” Ricky Reyes & “King of New York” EJ Risk (c) and
Amazing Red & Brian X L fought to a no contest
Withe the champions already in the ring, it was time for their first title defense against two long-time friends who were teaming in VPW for the first time.

In this highly competitive match, Risk accidentally fell into the referee.  While recovering, the rest of ConfluxXx ran down to assist Reyes and Risk. When the referee got his bearings together, he saw Delta and Page involved, but wan’t sure what happened. He immediately called for the bell.

Red and XL then dove to the outside onto all of ConfluxXx. They got back in the ring and were under the impression that they had won. It was at this point that the referee declared the match a no contest.

Brian XL got on the mic and challenged the champions to a rematch on May 11, 2012. It is unknown at this time if the champions have accepted.

Zombie d. “Your Hero” Mike Magnum
The unpredictable Zombie ran wild once again. This time Mike Magnum was his victim. Magnum appeared injured after the match.

Right after Anthony was eliminated, the mysterious newcomer, Kai Katana, hit the ring. The referee was tending to a fallen Mikey Old School while Katana stared down both El Conquistador and Destructico. It was not clear who his target was but he soon assaulted El Conquistador.  Katana then left the ring and Destructico seized the opportunity to pin his rival.

Fresh was clearly distracted by the issues between his two best friends, but that did not stop him.  The NYS Champion was once again victorious over another member of ConfluxXx.

VsK came out to accept. Just as the match was ready to start, Mr. Tibbs music blasted throughout the building and he came out to interrupt.

Mr. Tibbs said that he too was accepting the open challenge. VsK looked like he had Von Schmidt defeated, but Mr. Tibbs crawled in for a cheap roll-up and the win. The crowd was elated that Von Schmidt was defeated, but equally upset that VsK was not the new champion.

Mr. Tibbs again got back on the mic and stated that history was indeed made.

K-Fresh came out to check on VsK, but was clearly torn in his loyalties.

What will happen next when Victory Pro Wrestling visits Islip High School?

Who is Kai Katana and what does he want?

What will VsK have to say now that Mr. Tibbs is the new VPW Champion?

Find out at Islip High School May 11th! 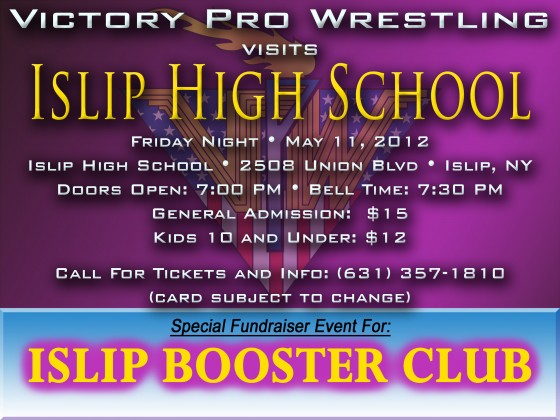