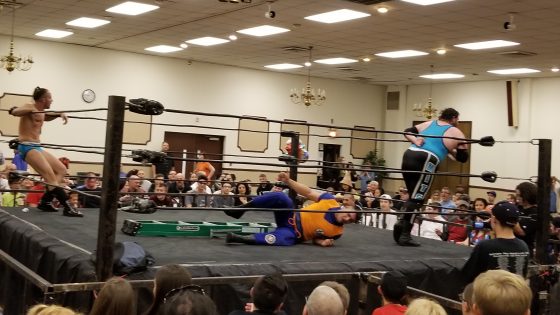 #! Brian Johnson and Meanest In The Game Justin Pusser brutalized the Down Boyz in their quest to become VPW Tag Team champions.

VPW Champion VSK announced that both Kevin Tibbs and Dorian Graves were both not in attendance tonight.  With Tibbs as the number one contender, and Dorian Graves, a member of The Church also not present, VSK challenged the only remaining Church member in the building – VPW Womens Champion Krissy.

Krissy came to the ring dressed like VSK, announcing that which she was already in a match tonight, she was able to find someone who would love to face him.

DEPORTATION CHALLENGE
The Giant Andre (w/ Grop the Caveman) defeated “Inner City King” Jorge Santi after a vicious choke slam.
• Before the match, The Giant Andre announced that he was helping Make Wrestling Great Again and was ready to deport another wrestler from VPW.
• Santi dressed up in Halloween gear as a Ghostbuster, which he would then use later as he shot Andre with his proton pack.  After first being shocked by it, Andre said “This is stupid” and then choke slammed Santi to end the match.

NEW YORK STATE CHAMPIONSHIP
Fighter Cat (c) defeated Jay Delta
• Before the match, Fighter Cat noticed a fan dressed like Fighter Cat, who then asked if he could come to the ring for a photo.  After posing in the ring, the fan attacked the champion, revealing himself to be Jay Delta
• Despite having the early advantage, Jay Delta was unable to put Fighter Cat away quickly
• Fighter Cat was a finger tip away from losing the championship after a Jay Delta discus elbow, but the official saw the touch of the ropes and continued the match
• After losing the match, Delta attacked Fighter Cat and then challenged him to a rematch at the King of New York show January 13

VPW Womens Championship
Krissy (c) defeated Karen Q (w/ The Giant Andre) and Antoinette Marie
• The Giant Andre introduced Antoinette Marie into the match because he was trying to Make Wrestling Great Again, including her into The Movement.
• During the match, both Antoinette Marie and Karen Q double teamed the champion
• After the match, The Giant Andre noticed that Grop the Caveman was outside the ring again, and inviting him inside to do push ups. He then assaulted Grop, hitting him with a chair to the head before leaving the ring, then returning, and brutally assaulting Grop with the chair several times over.

Ladder Match for the VPW Tag Team Championships
The Down Boyz (Tony and Steve) defeated One Mean Team (Justin Pusser and Brian Johnson w/ Miss Jasmine)
• RULES:  The winners of the match would be the team that retrieved both VPW Tag Team Championships from above the ring using a ladder
• Due to interfering in the match, Miss Jasmine was sent to the locker room by the official
• Both teams let it all hang out, using the ladder as a weapon during the match
• At one point, Johnson went to slam Pusser on top of Steve, laying prone on the ladder.  Steve moved out of the way, with Pusser slammed onto the ladder
• The ladder took the biggest beating of the night, buckling several times and almost breaking in half.
• Miss Jasmine came back to the ring and tried to steal the win for her team, climbing the ladder herself

VPW CHAMPIONSHIP
VSK (c) defeated Ricky Reyes
• One of VPW’s storied rivalries was renewed as these two have been fighting since 2009.
• Reyes and VSK went back and forth for 15 minutes in a classic match
• VSK was in the corner to grab the championship and get disqualified.  Reyes charged in, and VSK moved out of the way, leaving Reyes to knock the official out.
• Krissy ran to the ring and almost got caught in a VSK backbreaker, but she turned it into a spinning tornado DDT.
• Despite a few close counts by the official, VSK kicked out and finally put away the challenger to win the match 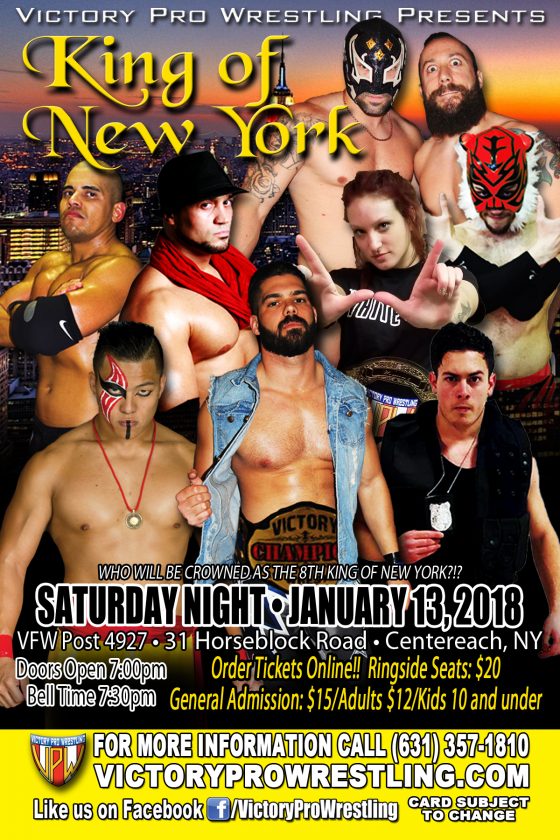