Reyes v VsK at Autumn Uproar: Best 2 of 3 falls for the VPW championship

Ricky Reyes has had his share of championship matches, but at the Gold Rush Rumble, it was the Victory Pro Wrestling championship on the line in a match that never took place due to injuries sustained one month earlier as VsK defended the championship against Jay Delta.

A month later at Boiling Point, the two finally collided in a match featuring two of the best in the main event. A kick by Ricky Reyes took out one referee, and a kick by VsK took out the second, which brought out the third referee who threw the match out. 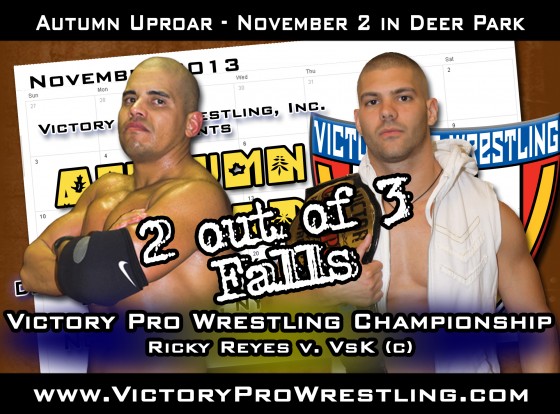 Victory Pro Wrestling management has ironed out the details and signed the match for the VPW Championship November 2 in Deer Park, with VsK defending the title against Ricky Reyes in a two out of three falls match.

This means that in order for you to win you must win by pinfall or submission twice.  Titles cannot change hands by disqualification, even if one fall is clean, giving VsK the championship edge.

What will happen when VsK and Ricky Reyes finally collide in a match to settle it all?

Can Ricky Reyes overcome the odds and beat VsK two times in one night?

He surely thinks so.  After pinning him to take the New York State Championship and the VPW Tag Team Championships, Reyes may be right.