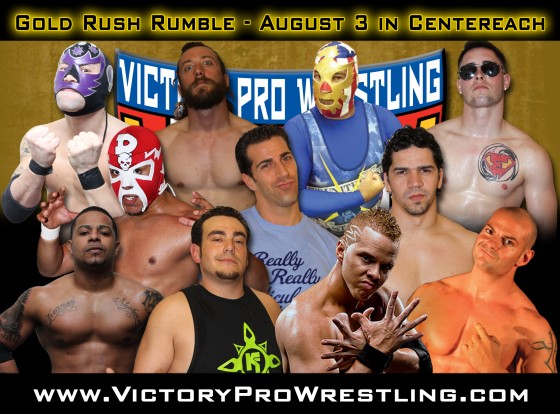 The first Gold Rush Rumble determined the first ever New York State Champion.  Since then, the Gold Rush Rumble winner was able to choose any Victory Pro Wrestling championship and challenge for it.

The winner of the Gold Rush Rumble has to go through two matches and at least 20 different VPW superstars, which makes this match very hard to predict.  The first match, a gauntlet style over-the-top rope battle royal, with the final four meeting in a Fatal Four Way match to determine the ultimate survivor.

So who will come back to this year’s big show?  Many of VPW’s top stars will want to be in this one, such as former New York State Champion “K-Fresh” Kevin Fulton, international superstar Amazing Red, and newcomer Dorian Graves.  They already know how important it is to be a champion here, with some desiring to be a part of history, and some looking to regain gold, such as former VPW Champion “Savior of Wrestling” Kevin Tibbs.

But what about former VPW Champion Jason Static, who has been out with an injury for ten months?  Will he put his name in the hat to be a part of the show?  Who else from Victory Pro Wrestling’s past will want to come back for one more chance at glory?

This is also a perfect chance for newcomers to Victory Pro Wrestling to come in and steal the show, but would they be able to overcome the odds of outlasting seasoned VPW superstars?