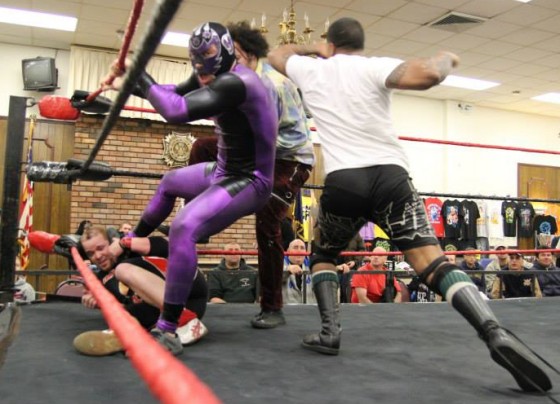 Brian XL rushed the ring to save his friend Amazing Red after he was attacked for pinning “Savior of Wrestling” Kevin Tibbs by his disciples Dorian Graves and Jacob Hendrix.

Did the “Man of Faith” bite off more than he could chew?

An angry and frustrated Kevin Tibbs, not only suffering a loss but upset that his team was unable to take the VPW Tag Team Championships earlier in the night, demanded that at December Devastation, Saturday night December 14 at the Deer Park Community Center, that Amazing Red and Brian XL’s “House of Glory” take on his own “Church of Tibbs” in a tag team match.

How will this go down in Deer Park? Amazing Red and Brian XL believe in a higher power in God and are both religious in their faith.  Red, a former 3-time TNA X-Division champion, and his best friend Brian XL, put their faith in God, sharing the word with their fans on Twitter and Facebook, and wearing their “House of Glory” shirts to also help spread the word. 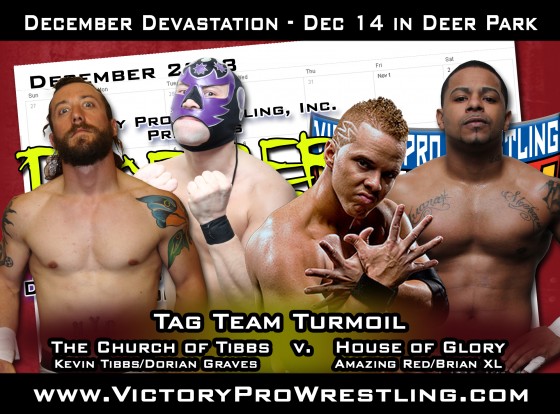 At December Devastation, he teams up with one of his disciples Dorian Graves to face Amazing Red and Brian XL in a tag team match featuring four incredible talents.

Can Kevin Tibbs and his Church of Tibbs faction make believes out of Amazing Red and Brian XL, or will the team of House of Glory open the eyes to all of Tibbs’ faithfuls on who the true Savior really is?