Victory Pro Wrestling returns to Centereach this Saturday night with Twist of Fate!

Victory Pro Wrestling returns to Centereach for Twist of Fate this Saturday night, featuring exciting matches in the next to last show of the 2013 year!

VsK, frustrated at the end of the 2-out-of-3 falls match that ended in a draw, posed a Twist of Fate challenge against Ricky Reyes, his opponent for the Victory Pro Wrestling championship in December.  VsK chose EJ Risk to face Ricky Reyes, and Reyes will choose.. well, we don’t know.

Reyes refuses to talk to anyone about his decision, including Victory Pro Wrestling Management, VPW-TV, or VictoryProWrestling.com, other than to say that everyone will be surprised to his choice for VsK at Twist of Fate. 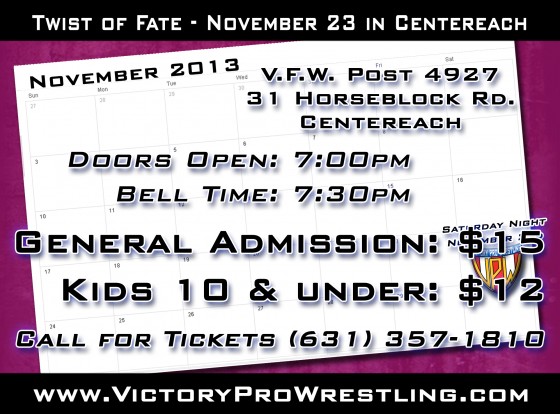 Mr. O.A., fresh off his first singles victory, will face the man he beat in Centereach, “Firebird” Jorge Santi, when Santi issued a challenge, feeling that the cool cat from the Other Side of the Tracks cheated his way to victory at Autumn Uproar.

And in six man tag team action, The Church of Tibbs will compete together against “K-Fresh” Kevin Fulton and the New Super Best Friends, Razzle Dazzle and Super Pogo!, after a gauntlet match gone awry led to Fulton laying the challenge down.