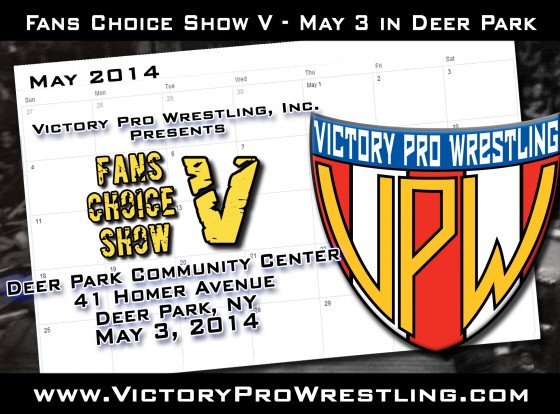 Victory Pro Wrestling presents Fans Choice Show V, Saturday night, May 3, in Deer Park.  Fans in Centereach for Spring Fever 2014 had a chance to vote, but so do you with our online voting.

Online voting is free, and is open until this Friday April 18.

Voting is simple: Just click here to cast your vote.

This year, we’re giving you the chance to vote for the stipulations of the championship matches.

The VPW Championship will be on the line when VsK defends the title against Kevin Tibbs.

Some say he was on his way to right a wrong.  Others call him a cheater.  VsK is tired of the accusations and wants to prove he is the best wrestler in Victory Pro Wrestling and is asking for your help.

He pleads for you to vote for a steel cage match, but you can also vote to see them fight in a Dog Collar match (both wrestlers are wearing dog collars, and are chained together with a 10 foot chain) or a Lumberjack match (all the VPW wrestlers surround the ring during the match).

For the New York State Championship, EJ Risk will defend the title against Ricky Reyes.  Your choices are a Best 2 out of 3 Falls match, a Long Island Street Fight (where anything goes), or a Submissions match (the only way to win is to make your opponent give up).

The VPW Tag Team Championship is also on the line with Da Hou$e Party giving The Down Boyz another chance at the titles.  Your choices are Texas Tornado Rules (all four wrestlers are legal throughout the entire match), a Ladder Match (both titles are hoisted high above the ring and to win you have to climb a ladder), and a Double Strap Match (one wrestler on one team is strapped together on his wrist to one wrestler on the other team’s wrist).

Victory Pro Wrestling is also giving you the chance to choose who you want to see take the Big Koz Body Slam Challenge.  You can pick “The Heartthrob” Romeo Roselli, Super Pogo!, or Mikey OldSchool.  The object is to pick up and body slam Big Koz to win $500.