VsK: “I choose EJ Risk” – Risk and Reyes to meet at Twist of Fate 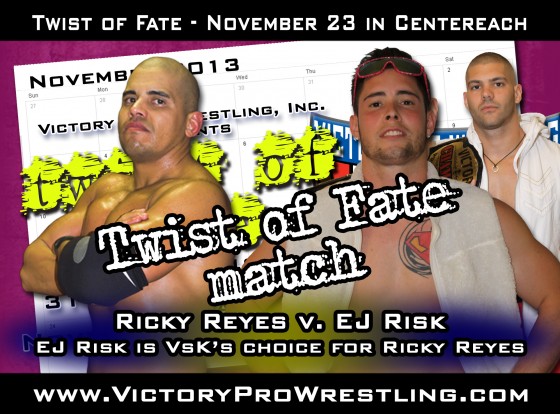 He came off strong in his first fall victory over VsK, but Ricky Reyes came up short and was unable to take the Victory Pro Wrestling championship at Autumn Uproar.

VsK challenged him to a Twist of Fate match, where he would pick Ricky’s opponent, and Ricky could pick VsK’s opponent.

Not only is he the 2011 and 2012 King of New York, but EJ Risk is also the 2013 Gold Rush Rumble winner. Most importantly, however, is his relationship with Ricky Reyes.

Under Reyes’ leadership, EJ Risk was once a member of ConfluxXx. In addition to scathing commentary and attacks against other VPW superstars, Risk and Reyes were also VPW Tag Team Champions together.

Since the 2013 King of New York tournament, though, things haven’t been the same.  Reyes and Jay Delta turned their backs on Risk and conspired to take the Crown from him.  That doesn’t take away from the years of training and teaming together.

Who else is better to challenge Ricky Reyes than EJ Risk?

Which is what VsK is betting on.

But who will Ricky Reyes choose as VsK’s opponent?