Who will be the new VPW Tag Team Champions? 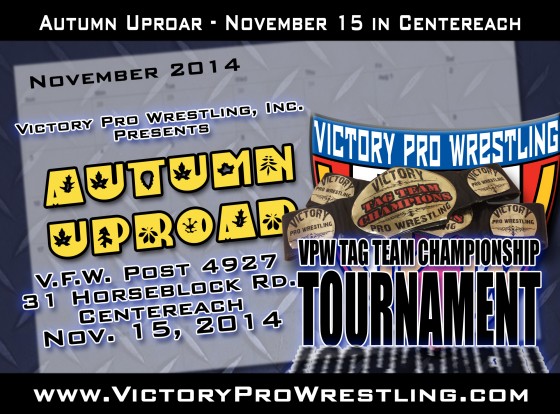 October 6, 2012.  That’s the day that Cooley K and K-MC became Victory Pro Wrestling Tag Team Champions.  But because of an injury to K-MC, they were unable to defend the titles, and in August, they were stripped of the titles.

Tag teams have been lining up to take their spot in the VPW Tag Team Championship tournament to crown new champions when VPW returns to Centereach in November.

Not only were they the most recent tag champions, Da Hou$e Party were also the longest reigning champions.  Cooley K has vowed that with or without his brother, the titles will go back to the Boogey Down Bronx.

Meanwhile, Tony and Steve from The Down Boyz have been hunting those titles for most of the summer.  They have not been able to beat Da Hou$e Party, and they were the ones that put K-MC on the disabled list.  Will this be their chance to shine?

What about the VPW Champion Kevin Tibbs?  He’s already held the tag team titles on two occasions, why not a third?  Who’s to say he doesn’t put the Church of Tibbs in the tag title hunt with Dorian Graves as his partner and again show their dominance in VPW?

And then there’s ConfluxXx.  People were writing out one of the most dominant forces in VPW history with the disappearance of Xander Page, then the ejection of EJ Risk, and the injury of Jay Delta.  But with Kevin Fulton joining the fold, is ConfluxXx looking to reclaim their former glory?