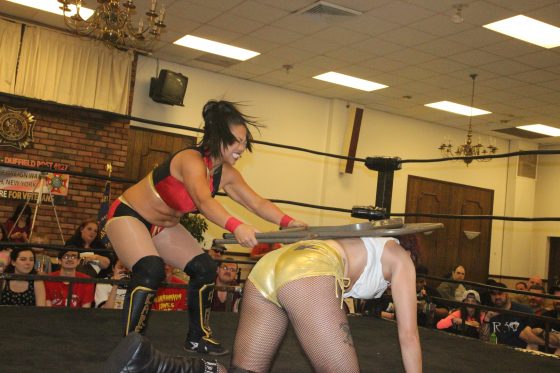 Despite taking a beating at the hands of Karen Q, White Girl finds a way to survive.

Grammar Cop defeated Kai Katana
• Grammar Cop interrupted the ring announcer and attempted to give him a citation before the match.

Fans Choice – Blindfold Match
New York State Championship
Fighter Cat (c) defeated Jay Delta via pinfall
• At one point in the match, Jay Delta peeked under his blindfold to get an advantage

Elimination match
Timberche defeated Razzle Dazzle and Inner City King Jorge Santi
• Razzle Dazzle was eliminated after both Timberche and Santi came back from his “Head Shoulders Knees and Toes” move.
• Both Santi and Timberche tried to cheat several times to win.

Fans Choice – No Disqualification
VPW Women’s Championship
White Girl defeated Karen Q (w/ Jacob Hendrix and The Giant Andre) via pinfall to become champion (TITLE CHANGE!)
• With the odds stacked against her, White Girl kept fighting back.
• Hendrix attempted to interfere on behalf of Karen Q, but Noti came out and gave him a low blow!

Fans Choice Main Event – Steel Cage
The Church of Tibbs (Dorian Graves/Kevin Tibbs) defeated EJ Risk and VPW Champion VSK via pinfall
• Winner could be decided via pinfall, submission, or if both members escaped the cage
• Church dominated early on, but Risk and VSK took over
• VSK threw Graves out of the ring, then locked the cage to keep him from coming back
• The double team was brutal, and VSK covered Tibbs, only to pick him up for more damage
• Graves attempted to climb back in but was kept out by VSK and Risk.
• White Girl came out to climb in the ring, double cross body Risk and VSK, and get the key to open the cage so Graves could rejoin the match