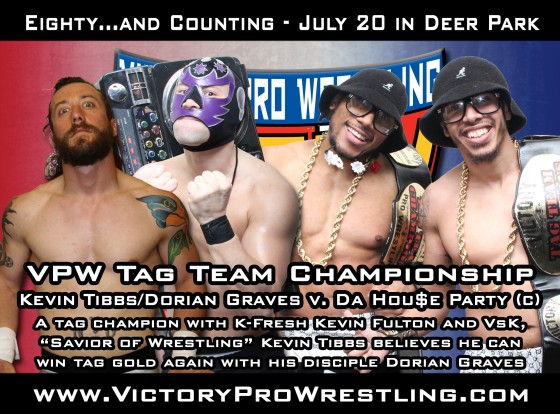 “Savior of Wrestling” Kevin Tibbs is a two-time VPW Tag Team Champion, winning his first title as part of the Funky Fresh Boyz and his second title with former best friend VsK.

When Victory Pro Wrestling returns to celebrate it’s 80th show in Deer Park at “Eighty…and Counting,” he plans on winning the tag titles again with his disciple Dorian Graves.

But can they win the titles, or is this just a spoken sermon from the Church of Tibbs that has no weight behind it?

In the ring, they work together as one cohesive unit.  They anticipate each other’s moves, they know each other’s weaknesses, and they carry each other to victory.

The case can be made that Kevin Tibbs is a tag team specialist, winning two championships with two different teams.  But he’s also shown his dominance in singles competition by becoming VPW Champion.

The questions lie with Dorian Graves.  Who is this masked disciple of the Church of Tibbs?  What kind of experience does he bring to the table?  He has power, but is that enough to win his first title in Victory Pro Wrestling?

Or will Da Hou$e Party show once again why they are the VPW Tag Team Champions?