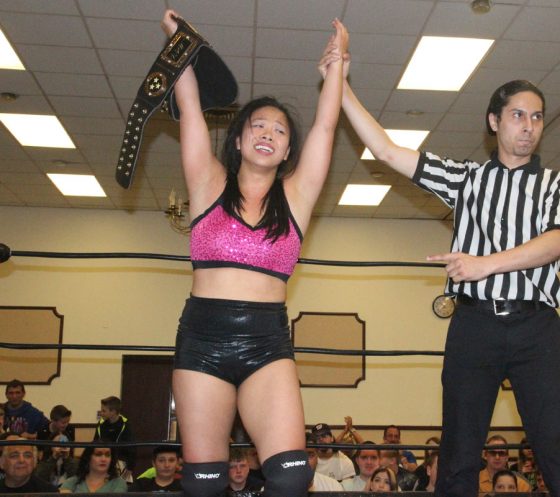 It’s been a fight but she kept fighting.  That heart and desire finally paid off for Karen as she was finally able to dethrone Nikki Addams as VPW Womens Champion.

Before things started, Romeo Roselli rattled off how busy Deonna was by highlighting her performances in TNA, ROH, and NXT.  He then proceeded to tell the fans that tonight, he was going to be HER advisor.

Ring weathered Deonna faced off against VPW newcomer Damaris in what started off as domination from Deonna, but Romeo’s charge would get the upper hand.  Frustrated, Roselli would get involved, causing the disqualification.  Just as Roselli looked to pack a right fist into Damaris, Damian Adams came to make the save.

Referee Steven D disqualified Deonna, but then made a mixed tag match!

Wearing slacks and a button down shirt, Roselli took things in control to start the impromptu match.  Adams and Damaris got to work together and put up a fight, but in the end it was Roselli and Deonna that picked up the win.

JACOB HENDRIX
vs THE BOOGEYMAN

Jacob, along with Kristy, ran down The Boogeyman.  He said the last time Boogeyman was in VPW, things may not have gone his way but tonight would be different.  Enter: The Boogeyman.  After chasing Jacob around the VFW Hall, who kept putting Kristy between himself and his opponent, The Boogeyman finally got his hands on the Seattle native and picked up the win.  After the match, The Boogeyman once again fed worms to Jacob.

VPW Commissioner EJ Risk and New York State champion VsK came to the ring next.  Risk ran down the rest of the show, then said that VsK, because he’s done such a great job lately, deserved the night off.

Fighter Cat came to the ring and decreed he deserved a chance to redeem himself after being robbed of his opportunity to become New York State champion earlier this year. He demanded a match to take place right “meow.”

After EJ and VsK stopped laughing, Risk made the decree – if, and IF – Fighter Cat can beat VsK tonight, he would get his shot at the New York State championship at Upper Limits.

Fighter Cat’s speed and technical ability started the match, but the sheer power of VsK along with his vast ring experience, put him back in control.  His dominance continued through the match, with Fighter Cat looking to be set out to pasture, but the young Cat came back with a roll up to steal the win.

Xander Page showed his power early on with his manhandling of all the opponents in this match.  It didn’t mater what else was going on when Page was in the ring, but that changed when him and Tony started battling outside the ring and into the back, leaving Timbershae and Destructico in the ring. Finally, with a chance to wrestle without worrying about Page taking over, Timbershae sang his way to victory.

This match looked to be a classic in the making, but the ending had it’s own implications of history making moments.  It started off with the leaders of both teams, Reyes and Tibbs.  The tag team fluidity of Tibbs and Graves showed with their dominance of their ConfluxXx rivals.  Fulton took over with his sheer size and power against Tibbs, leaning control back to ConfluxXx.  With a flurry, the Church tried to take control but ConfluxXx was able to maintain control.

In a “What the heck is going on?” moment, Kristy, still furious about what happened earlier in the Boogeyman match, chased after and started beating Jacob Hendrix in the ring!  Once the referee cleared up that mess, ConfluxXx regained control.  An errant kick in the corner by Reyes to partner Fulton that Tibbs ducked from caused enough distraction for the Church to steal the win and retain the titles.

After the match, Fulton kept accusing Reyes of costing them their match until Reyes finally snapped and hit Fulton with an enzuigiri and left him in the ring.

If Karen lost the match, she would never get a chance to be VPW Womens Champion again.  With the challenger in the ring and manager Mikey Old School coming from the back with the title, Nikki Addams surprised her opponent from behind.  The champion dominated Karen inside and outside the ring, but the Queens native proved to be a fight.  Addams pulled out all the stops, but all the stops were not enough as tonight was Karen’s night as she finally ascended to the top of the VPW Womens Division as new champion!

After the match, Grop the Caveman came out to the ring to present flowers and a lei, which shocked Karen, but she accepted before heading to the back.

It was Katana’s time to take back his title.  His only obstacle was Jay Delta.  The two forces went back and forth in this main event classic.  The battle spilled outside the ring and Katana came back with a super running clothesline from the locker room area.  Delta tried to use the VPW Championship as a weapon.  Fulton came out to help his partner, but Reyes came out to stop him?

This distraction kept the official busy, but not busy enough to see Jay Delta retain the VPW Championship.