Three women, One champion at VPW: 125 and Counting 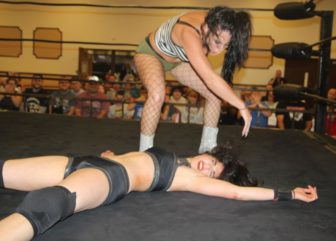 She began her reign on the heels of Karen Q, and since becoming Victory Pro Wrestling Women’s Champion, White Girl Kris Stadtlander has dominated the women’s division.

She began her reign on the heels of Karen Q, and since becoming the first ever Queen of New York, Sam L’Eterna has been on the hunt to become VPW Women’s Champion, using friends to try to weaken the champion.

In her first VPW match in Brooklyn, Antoinette Marie impressed VPW Management and became a part of the roster. She befriended Sam L’Eterna, but recently turned her back on her at Upper Limits.

The three of them will face off in a Triple Threat match at VPW: 125 and Counting for the VPW Women’s Championship. Will Stadtlander reign supreme? Can L’Eterna elevate her royalty over the Women’s division? Or will Antoinette Marie be the wild card?