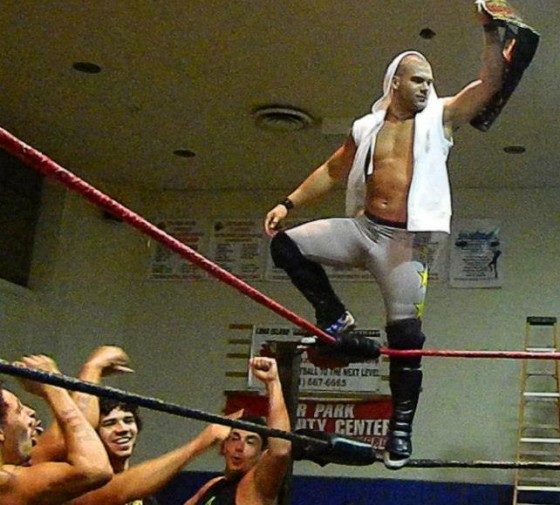 When Jay Delta challenged VsK for the Victory Pro Wrestling championship last month, he wasn’t expecting the chaos that came with challenging for the top prize.  When VPW Management decided to make it a lumberjack match, it changed things dramatically.

VsK was able to defend the championship against one of VPW’s originals, but it wasn’t a cake walk.

The show started off with the Victory Pro Wrestling champion in the ring, asking Delta to come to the ring and discuss the main event of the night, face to face.  When Delta came out, he stopped at the entranceway, told the fans that as their King, he would rise and become their champion.  VsK asked why wait, dropped the title, and invited Delta to the ring right there and then, but fellow ConfluxXx partner Ricky Reyes kept Delta back, and told him to save it for the match.

Super Pogo (w/ Mikey Oldschool) def. Razzle Dazzle (w/ Grop)
A back and forth match that could have gone any way, Razzle Dazzle had Super Pogo’s number several times, but the masked children’s clown was able to pick up the win. 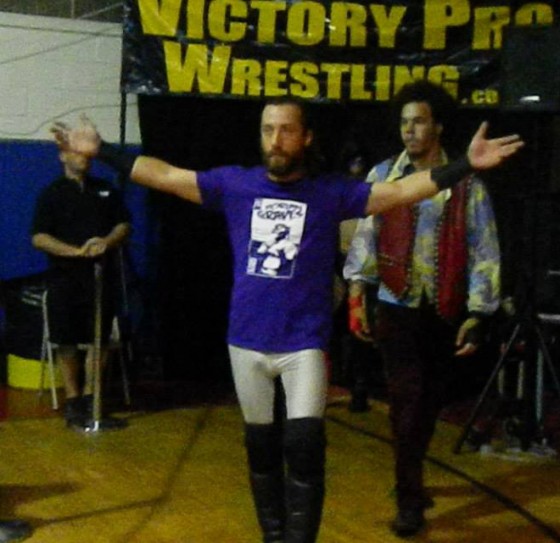 After the match, with a slowly recovering Razzle Dazzle still in the ring, The Church of Tibbs approached the ring.  “Savior of Wrestling” Kevin Tibbs kept Jacob Hendrix at bay, then anointed Razzle Dazzle in an accepting way.  But it was just a ruse, when both Hendrix and Dorian Graves attacked Razzle Dazzle.

Super Pogo rushed back to the ring and helped fend off the Church of Tibbs, giving a hand to his opponent after clearing the ring.  Razzle, unsure of what to do, shook the hand of the man that just beat him, and the fans in Deer Park clearly were behind Pogo and Razzle Dazzle!

After Pogo and Dazzle left the ring, Tibbs grabbed the microphone and once again brought up the conspiracy he believes Victory Pro Wrestling has against him and his Church.  His latest rant was about how he believed VPW Management did not want him to have the tag team championships as they booked Dorian Graves in a singles match before the title match later on that evening.  To rectify this, Tibbs told Graves’ opponent, Firebird Jorge Santi, that after beating him last month, he would have to start at the bottom of the ladder, and that tonight, his opponent would be Jacob Hendrix.

“Firebird” Jorge Santi def. Jacob Hendrix (w/ Dorian Graves and Kevin Tibbs)
Despite the size advantage, Hendrix was able to mount a serious offense against his opponent, not without any outside assistance from Graves and Tibbs.  But the onslaught was short lived, ending when Santi connected with his double arm powerbomb to finish the match.  After the match, Tibbs attacked Hendrix for failing him in his mission.

“Cuban Crippler” Ricky Reyes def. “Man of Faith” Brian XL
Brian XL has grown a lot in the past couple of years, and while he had a couple of great chances, it was the experience of Reyes that carried him to victory. 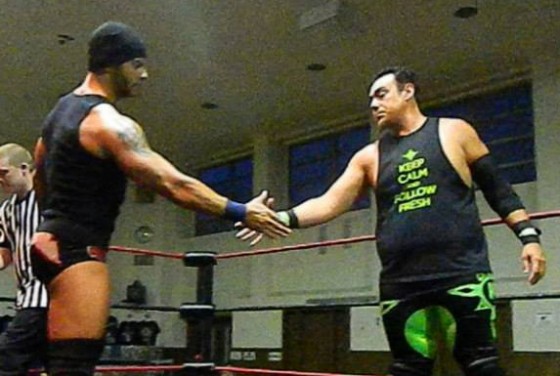 Jason Static def. “K-Fresh” Kevin Fulton
Before the match started, Static wanted K-Fresh and the fans know that this match shouldn’t be about revenge, but about the fans and the company, and invited K-Fresh to shake his hands.

During the match, there were several times where the old Jason Static would have taken advantage of K-Fresh’s disadvantages, but tonight we saw none of that.  With K-Fresh rallying, Static looked to re-hurt his right arm, grabbing the pectoral area, writing in pain.  The referee called for the doctor, but Static quickly came back to health and stole the win.

Citing his experience with his teacher, former TNA World Champion Bully Ray, Static was excited to tell the whole crowd in Deer Park that he fooled each and every last one of them.  But his excitement turned sour when K-Fresh challenged him to a rematch at the Gold Rush Rumble. 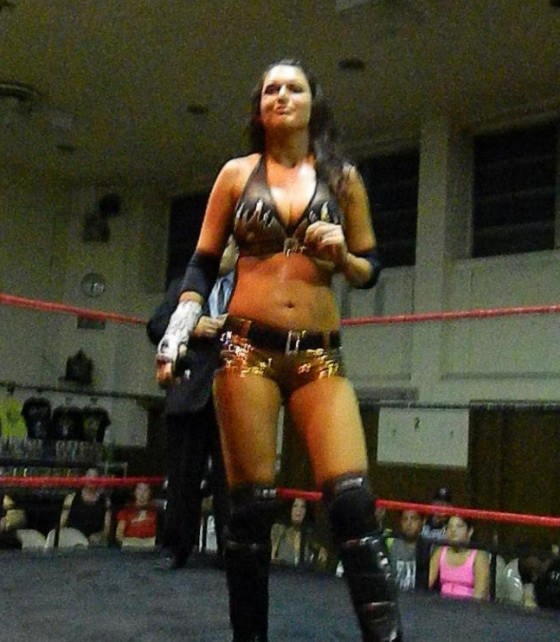 Payton Banks def. Jillian Hall via disqualification
The former TNA Knockout and current Shine champion Payton Banks came to the ring first to answer “The Jillian Challenge” where if Jillian Hall is pinned, Jillian will leave Victory Pro Wrestling!  Jillian had other ideas, telling Banks that nobody came to Deer Park to see them wrestle, they came to Deer Park to hear Jillian sing!  After grabbing the mic from her, ending the singing, Jillian attacked her to start the match.

Banks was able to show a real threat to Hall’s challenge, and almost ended Jillian’s tenure with VPW.  Frustrated, Jillian grabbed a chair from the audience and threw it in the ring.  While the referee was distracted, she ran to the announce booth, grabbed a microphone, ran back to ringside, and then hit Banks with the mic!  A roll up and a pinfall was scored, and Jillian Hall was declared the winner.

But former WWE Diva Ashley Massaro, in attendance, startred screaming about how Jillian had cheated.  She ran to ringside and explained what happened to the referee, who reversed the decision and declared Payton the win by disqualification!  However, since she did not pin Payton, she technically “failed” the Jillian Challenge. 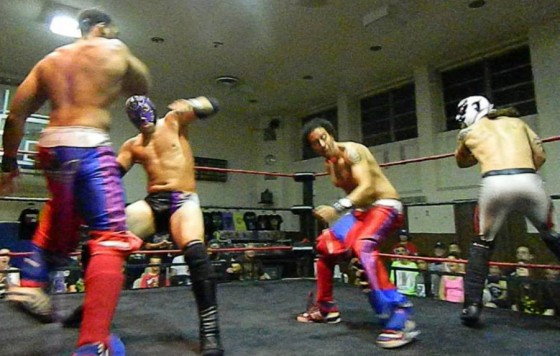 VPW TAG TEAM CHAMPIONSHIPS
Da Hou$e Party (Cooley K/K-MC) (c) def. The Church of Tibbs (Dorian Graves/Kevin Tibbs w/ Jacob Hendrix)
Showing signs of unity, Kevin Tibbs came to the ring wearing a mask, matching the mask that his partner Dorian Graves wears to the ring.  And while he believed that he could be a three time VPW Tag Team Champion with his third partner, Tibbs was unable to live up to that declaration.

An amazing match between the tag team champions and the challengers, and one of the toughest challenges to date, but it wasn’t enough to take the gold from Cooley K and K-MC.

VPW NEW YORK STATE CHAMPIONSHIP
Kai Katana (c) def. Amazing Red
Since his debut to VPW, Kai Katana has dominated most of his opponents.  Amazing Red, an international superstar, was not going to be another one of Katana’s victims.

Countering all of Katana’s big moves, Amazing Red was on the verge of being the seventh champion in the title’s history.  However, a powerful bridging electric chair suplex was the end of the match, scoring the win for Katana.

LUMBERJACK MATCH
VICTORY PRO WRESTLING CHAMPIONSHIP
VsK def. “King of New York” Jay Delta
With lumberjacks surrounding the ring, VsK and Jay Delta stepped it up a notch.  VsK respecting the fact that Jay Delta, one of VPW’s originals, was one of the best in the company, and Jay Delta believing he was better than VsK, set the tone for this explosive encounter.  The action spilled outside the ring, and the lumberjacks were able to, at times, restore order.  A crazy spot at the top turnbuckle turned scary, with VsK looking to superplex Delta.  Delta pushed one way, VsK pushed another, and both wrestlers tumbled to the outside of the ring.

After several VsK super kicks, and a couple of Delta spinning forearm shots, it started to look like this match would never end, but VsK was able to pull out all the stops to successfully defend the championship.

After the match, Ricky Reyes snuck from behind and attacked VsK,. then he grabbed the belt and bashed the back of the champion’s head.  Reyes then challenged VsK to a match at the Gold Rush Rumble next month!