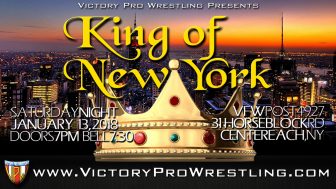 In our first event of 2018, Victory Pro Wrestling will convene in Centereach to crown a new King of New York.

The winner of the King of New York will not only be crowned as royalty, but will also be granted an opportunity to become Victory Pro Wrestling champion as he will face the winner of VSK and Kevin Tibbs at our anniversary show in March, Blood Sweat and 13 Years.

Ten competitors will compete this Saturday night, but only one will be crowned as the King of New York.

Tickets will also be available at the door, with doors opening at 7pm.