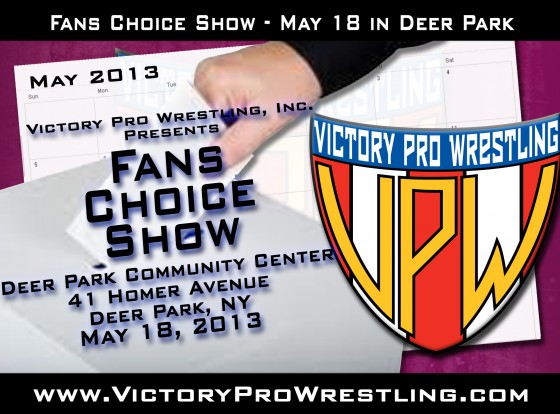 Every year, Victory Pro Wrestling gives our fans a chance to put the show together with our Fans Choice Show, and this year is no different!

Starting at the April 20 “Spring Fever” show in Centereach, we asked our fans who they thought should face each of our current champions.  We also asked our fans which kind of specialty match they’d like to see most.

And on Sunday, we also posted the link to our online voting booth to give everyone else a chance that may not have been in Centereach a chance to cast their votes and be heard.

The overwhelming response and the demand for one particular style of match gave the management at Victory Pro Wrestling an idea. 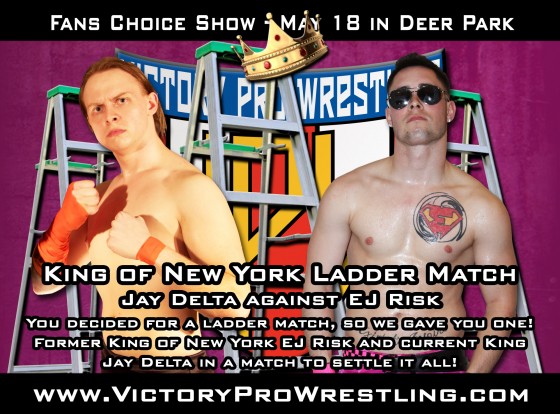 For the first time ever, the Crown of New York will be up for grabs as the 2013 King of New York Jay Delta will defend his kingdom against former king and former partner EJ Risk.

It all started in October, when EJ Risk was still a part of ConfluxXx, and he and Ricky Reyes were the co-holders to the Victory Pro Wrestling tag team championship.  A miscue caused EJ to hit his springboard kick – not on Cooley K, but on Rick y Reyes – costing them the tag team titles.

Since then, ConfluxXx members Ricky Reyes, Jay Delta, and Xander Page refused to return any of EJ’s phone calls or texts, and EJ wanted to know why.  At the King of New York tournament, he asked his brothers in arms to the ring, but instead of a civil discussion, EJ got beat down and kicked out of ConfluxXx.  Later on that night, Jay Delta and EJ Risk were in the finals, but a distraction from Ricky Reyes cost EJ the Crown of New York.

What will happen with the Crown hanging 20 feet above the ring?  Can EJ reclaim what he feels is rightfully his, or will Jay Delta reign supreme? 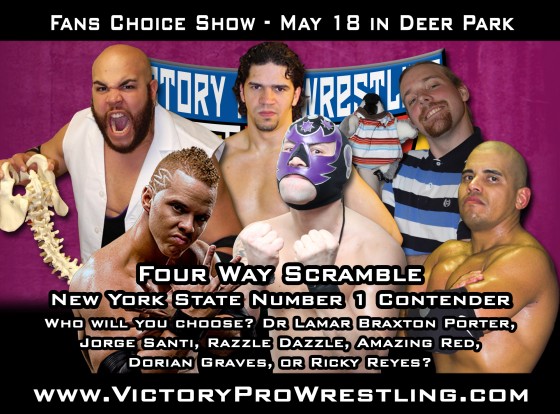 But just because you voted for one match doesn’t mean we’re done!  We still have more matches to vote on, including a match we added for the online survey – a Four Way Scramble to determine the Number One Contender to the New York State Championship!

The four wrestlers with the most votes will get a chance to become the Number One Contender for the New York State Championship.  Who will you vote for?

Speaking of the New York State Championship, who do you want to face the current champion K-Fresh Kevin Fulton?

Do you want him to face the challenge of Jay Delta?  These two have an incredible history together in the tag team division, plus an amazing blindfold match that you voted on last year for them to be in.

What about “Firebird” Jorge Santi?  Manhattan’s own has certainly grown in the past couple of years and is now a part of Ring of Honor’s incredible roster.  Will you give him a chance to show off Santi’s skills when Victory Pro Wrestling returns to Deer Park?

Ever since becoming the Victory Pro Wrestling Tag Team Champions, Cooley K, K-MC, and Da Boombox have certainly brought “Da Hou$e Party” from the Boogey Down Browx to the VPW ring.  Who do you think can party hardy with them?

How about Amazing Red and Brian XL?  These two best friends have an amazing chemistry together, and this would definitely be a Subway Series match between Brooklyn and the Bronx that rivals the legendary Dodgers and Yankees.

What about the team of Razzle Dazzle and Destructico?  Here’s a team that if you asked us about working together, we’d all have a little laugh, but after two matches against the champs, Razzle and Destructico have been making a little chemistry work for them in the ring.

And then there’s Kevin “MISTER” Tibbs and his disciple Dorian Graves.  Tibbs, the former VPW champion, is also a former VPW Tag Team Champion.  Graves, a masked newcomer to VPW, has aligned himself with Tibbs.  Is that enough for you to vote for them to become the top contenders to the tag team titles?

And for the top prize, currently held by new champion VsK, the Victory Pro Wrestling championship.

Amazing Red challenged for the VPW Championship in the past, coming short to Josef Von Schmidt on more than one occasion.  Do you feel that now is his time to shine?

Former champ Kevin “MISTER” Tibbs believes he’s going to win this ballot, but will that be enough for him to get one more chance against VsK?

Click here to cast your votes!
Deadline to vote: April 30 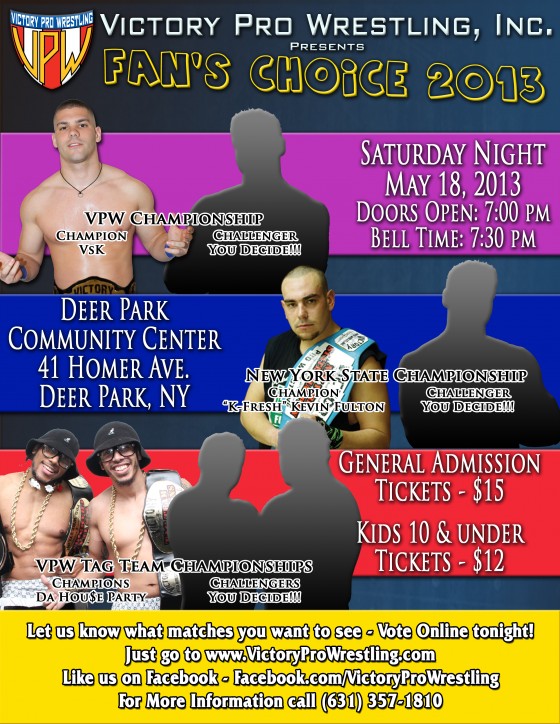