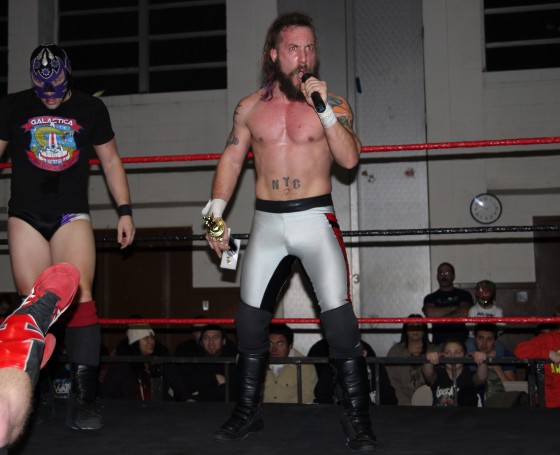 “Savior of Wrestling” Kevin Tibbs professed that he would be the 2014 King of New York.  Last night, he did just that.

In 2011, “K-Funk” made it to the finals but was unable to overcome the pain caused by ConfluxXx after they attacked his leg and hurt him. In 2012, he again made the finals but Kevin Tibbs was accidentally superkicked by VsK, costing him the match.

After becoming VPW Champion, then losing the title, Tibbs picked up a following of disciples for his Church of Tibbs and last night it paid off.

Sitting by the sound booth was K-Fresh Kevin Fulton, tweeting the results online as it happened.

FIRST ROUND OF THE KING OF NEW YORK TOURNAMENT
The Cuban Crippler Ricky Reyes against Super Pogo! (w/ Mikey Old School)
Super Pogo! was unable to outwrestle Ricky Reyes, but he came close to picking up a win. The wily veteran picked up the win with a vicious brainbuster.

Razzle Dazzle (w/ Mikey Old School) against EJ Risk
This match started with a hug as both wrestlers showed signs of good sportsmanship. Once the bell started, things broke down until Risk finally picked up the win.,

After the match, EJ Risk said that he will win the King of New York Tournament, he will take on his friend VsK at the 8 Year Anniversary Show, but at Before the Storm, Saturday February 8, in Centereach, he will challenge Kai Katana for the New York State championship, too.

“Savior of Wrestling” Kevin Tibbs (w/ Jabob Hendrix and Dorian Graves) against “Firebird” Jorge Santi
Before the match, Tibbs professed to the fans in Deer Park that he would become the King of New York, but that wasn’t important to him – becoming VPW Champion was, and after he won he would beat VsK at the 8 Year Anniversary Show.

Determined to prove Tibbs wrong, Manhattan’s son looked to soar past the former VPW Champion, but Kevin Tibbs was too much for Santi to handle after missing his Mario double-stomp. Both Graves and Hendrix served as outside distractions, helping their Messiah win the match as Dorian Graves held Santi’s legs down.

K-MC against Cooley K
K-MC was ready for anything, until ring announcer John E Radioo announced that his opponent would be his partner Cooley K. The match started off with a “Fingerpoke of Doom” for a two-count, and Cooley K said “Not here, not for you fans.”

The VPW Tag Team Champions out on a good match, but we’ll never know who would be better as Mister O.A. and Big Koz stormed the ring and attacked them.

Mister O.A. and Big Koz said that it was time for them to become VPW Tag Team Champions, but that they would decide when it’s time. It may be at Before the Storm, it may be at the 8 Year Anniversary Show, but it will be when they want to.

From there, they went right into the Big Koz Challenge, putting up $500 for anyone that wanted to try and bodyslam Big Koz.

For the first time ever in the Big Koz challenge, a Jerry Fitzwater show broke out!

Fitzwater came down with Grop the Caveman and asked the fans if they wanted to see the Fitz pick up an easy $500. With the fans approval, he went eye-to-eye with Big Koz. All of a sudden, Fitzwater started channelling Wrestlemania III’s Hogan-Andre moment, as he started to Hulk-up. Then, he pointed to the crowd, Big Koz looked, and Fitzwater made his attempt!

Unfortunately, his back gave out, and he started crying in pain about how he couldn’t do it. Grop the Caveman looked from outside the ring with concern, and Fitzwater pulled him in to assist him. Grop, confused, backed up into Big Koz, which ended up with Grop being on the receiving end of a Big Koz Splash.

After announcing Big Koz as the winner, Mister O.A. wanted to get his opponent out so he could win the King of New York tournament already.

Amazing Red’s pedigree overshadowed the inexperience of Mister O.A., but the greaser from the other side of the tracks came close to winning. The former TNA X-Division champion had the win, but Big Koz distracted the referee, screaming that Amazing Red wasn’t supposed to do that, that Mister O.A. was going to win.

A sneak attack from O.A. backfired, as it knocked Big Koz off the apron. Without his muscle to cause another distraction, Mister O.A. was eliminated from the tournament.

Kai Katana against “Man of Faith” Brian XL
The New York State championship was not on the line, but a chance to advance to the second round was. XL was able to take the champion on, but Katana finally finished him off with a running neckbreaker.

SECOND ROUND OF THE KING OF NEW YORK TOURNAMENT

Before the next match, ring announcer John E Radioo announced that while the second round was set to be a triple threat match, because both Cooley K and K-MC were eliminated, that the next match would be a singles match.

“Savior of Wrestling” Kevin Tibbs (w/ Jacob Hendrix and Dorian Graves) against EJ Risk
Prior to the tournament, EJ Risk has been in the finals of the 2011, 2012, and 2013 tournament, winning the first two. In the 2011 and 2012 tournaments, his opponent: Kevin Tibbs.

EJ started off strong, but Tibbs was able to control him. With EJ coming back, the Church of Tibbs made their presence known but EJ Risk hit a Fameasser on Dorian Graves to end the attack. The distraction was enough, as Tibbs won the match.

Katana and Reyes double teamed Amazing Red, but they were frustrated with each other as they both wanted to pin the fallen Red. Amazing Red came back with the victory to advance to the finals.

This was Graves’ first chance to become VPW Champion, and with the way he performed, it may not be his last. VsK was able to defend the title successfully, but not without some trouble.

Jacob Hendrix caused distractions, but it was VsK setting up for his superkick that caused the biggest distraction of them all.

K-Fresh Kevin Fulton, still tweeting results of the show, took exception to Hendrix’ interfering and went down to ringside. Catching Hendrix off guard, K-Fresh knocked Hendrix out with a vicious Lefty Lariat. Inside the ring, a distraction-free VsK finished off Graves with a superkick to defend the title.

FINAL ROUND OF THE KING OF NEW YORK TOURNAMENT
“Savior of Wrestling” Kevin Tibbs against Amazing Red
With the winner of the match becoming the new King of New York and the number one contender for the Victory Pro Wrestling championship, both superstars knew they had to turn things up a notch.

Tibbs and Red went back and forth. With Red down, Tibbs called for Dorian Graves to come out to help.

The masked disciple did come down, but so did Brian XL. The distraction kept the referee from seeing a low blow from Tibbs. He turned back just in time to see Tibbs roll up Amazing Red and counted the fall.

After the match, Tibbs grabbed the microphone and trophy, and with Dorian Graves in tow, he bragged about how he professed he would be the King of New York and the next VPW champion before launching an assault on the fallen Red until VsK came to make the save.

The Victory Pro Wrestling champion then challenged Tibbs and Graves to face himself and Amazing Red at Before the Storm, Saturday February 8, in Centereach.