The date was January 25, 2011.  As a team, they worked together and were victorious, with VsK as the sole survivor of the Steel Cage Survival Match.

A year later, the two were VPW Tag Team Champions, but shades away from a change that would affect the most coveted prize, the Victory Pro Wrestling Championship.

In a thrilling three-way challenge, then-champion Josef Von Schmidt fell to Kevin Tibbs, starting a year-long reign of dominance, and a year long chasing by VsK to prove he is, in fact, the best wrestler in VPW.

That day finally came for VsK when he capture the top prize at the 7 Year Anniversary Show.  Since then, VsK has faced Tibbs’ conspiracy of him avoiding the “Savior of Wrestling,” and VPW Management’s alleged protection of the champion by not giving him the title opportunities he felt he deserved.

Tibbs became the number one contender by winning the King of New York tournament this year, and at Spring Fever, he came close to stealing the championship as Dorian Graves threw a steel chain into the ring.  VsK intercepted, then used the chain himself, causing the official to end the match and disqualify VsK.

The champion begged and pleaded with the fans to choose a steel cage, and the fans in Centereach and online listened.

With an amazing 72% of the votes tallied, the Victory Pro Wrestling championship will be defended inside the confines of a 15-foot high steel cage match when VPW returns to Deer Park at Fans Choice V, Saturday night May 3.

This will only be the second time Kevin Tibbs has been inside the cage, his first in singles competition.

VsK, however, holds a singles victory over Kai Katana from September of 2013 after the Asian assassin missed a crucial moonsault from the top of the cage that would have changed the ending of the match.

VsK’s advantage comes with the Church of Tibbs disciples Dorian Graves and Jacob Hendrix not being involved in the outcome of the match.

The challenger, however, also has an advantage.  Kevin Tibbs is hungry.  He wants this match.  He needs that championship.  He’s fought long and hard to become Victory Pro Wrestling champion, and at Fans Choice V, he will have the chance to become the first ever two-time champion. 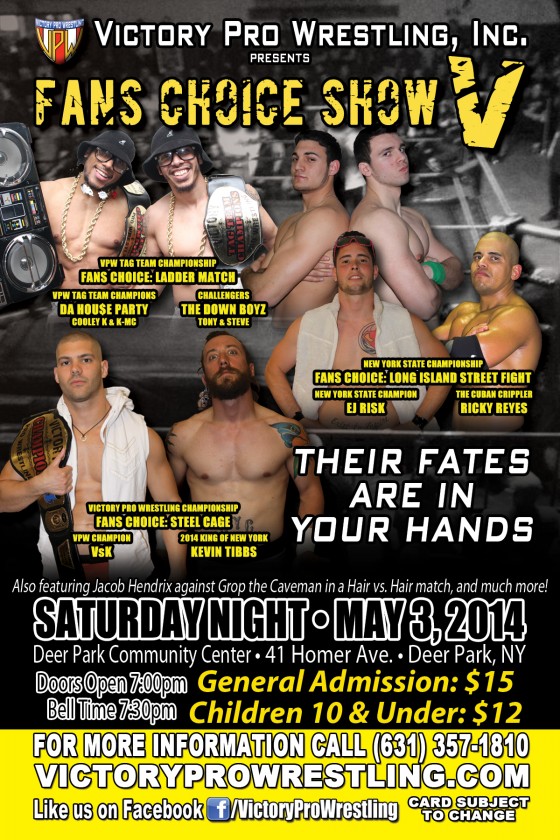 ALSO IN ACTION…
HAIR VS. HAIR
Jacob Hendrix against Grop the Caveman
Loser will be shaved completely bald after the match!