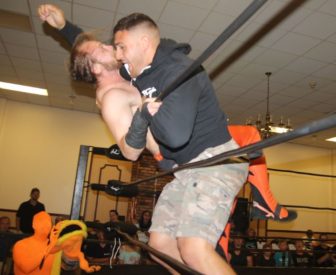 For most of 2018, the hunt for the New York State championship has been intense between Jay Delta and Steve Gibki.

It started with the Jersey Muscle Jock winning a number one contendership match. Then it developed with a series of Pick your Poison matches. Finally, Gibki won the New York State championship in June.

But there was a wrinkle with that. Delta’s best friend and former partner Kevin Fulton had recently become VPW Commissioner, and he used his new authority to declare that Delta was still, in fact, the New York State champion, as Gibki just won some new belt that doesn’t mean anything.

At VPW:125, Gibki looked to prove once and for all that he was the true champion in a one-on-one contest against Delta before Max Caster protested that he was overlooked and demanded to be added. That match ended without resolving who in fact was the undisputed New York State champion, and with a new twist.

Gibki’s former tag team partner Tony Vicinta, who he won championships as The Down Boyz with in VPW, stormed the ring and saved Gibki after both Delta and Gibki pinned Caster. Once the dust settled, the reunited duo had a few words to say to each other, but one thing is for sure, Tony is back.

And Delta was not pleased. He demanded a match against Tony, and Commissioner Fulton obliged. At the Gold Rush Rumble, Jay Delta will face Tony Vicinta. 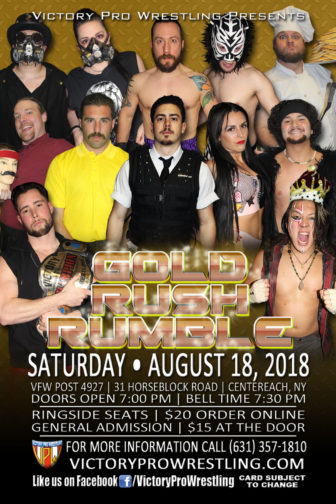