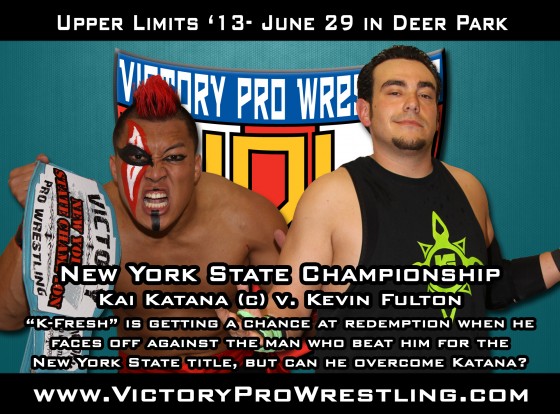 When he first made his debut, nobody would have ever dreamed the impact Kai Katana would have on the face of Victory Pro Wrestling.

One year later at the 2013 Fans Choice Show, the fans gave him a shot against “K-Fresh” Kevin Fulton for the New York State Championship.

In one of the most dominating matches since he first appeared in VPW, Katana unleashed an assault unlike any other, overcoming the champion, locking in a rear naked choke to smother the life from Fulton and end the longest New York State title reign.

At Carnage in Centereach VIII, Fulton demanded a rematch after overcoming the threat of Romeo Roselli.  Later that night, after a chaotic 6-man match, K-Fresh asked Katana again for that rematch.

Without a word, the New York State Champion, who earlier choked out Jorge Santi to defend the belt, accepted the challenge.

But did K-Fresh make a mistake in making this challenge?  Katana has done nothing but add more weapons to his wrestling arsenal, from his top rope moonsault, his hanging choke on the ropes, and now his new rear naked choke.