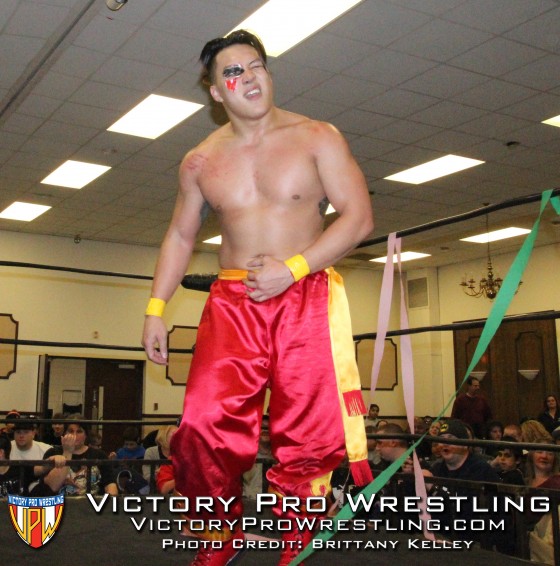 Kai Katana has joined royalty after an amazing night of wrestling action in another sold-out crowd to start the new year off.

To open up the show, VPW Commissioner EJ Risk acknowledged to the fans that one of our VPW stars, The Zombie, had died this week.  With a heavy heart, Risk shared that Zombie was a good friend and a great father.  Wrestlers from the locker room came out to surround the ring as Risk called for a 10-bell salute to honor one of Victory Pro Wrestling’s most charismatic and loved performers.

With the roster heading back to the locker room, Risk reached out to the fans and let them know that Zombie wouldn’t want to stop the show, that he’d want us to rock the house down in his memory, and went to make an important announcement before being cut off by VPW Champion Ricky Reyes and ConfluxXx.

Jay Delta told Risk that Reyes couldn’t wrestle, that he had a doctor’s note.  Delta, Reyes, and Kevin Fulton presented a note to Risk, even telling him to read the note to prove they weren’t kidding. Risk mocked the note, but decided to give Reyes the night off.  Risk stopped to tell Reyes that at the 9 Year Anniversary Show on March 7, Reyes would defend the title against the winner of the King of New York tournament… and his original opponent for the night, Kevin Tibbs.

Risk’s attention turned to Tibbs, who now was without a match.  He decided to make a match to give Tibbs a title match, putting him together with Church of Tibbs disciple Dorian Graves as the Church would challenge The Down Boyz for the VPW Tag Team Championship later in the night.

The VPW Commissioner returned the volley, telling him that from day one, he would not let the fans suffer from getting the same old crap every show, that fans were sick and tired of watching the same old crap on television each week, and that before EJ Risk was commissioner, VsK getting a title match was the same old crap.  Risk said this would be better not just for the fans but for VsK, because he would work for a title shot, and prove he was deserving of it.

Which lead to his big announcement, that VsK would be given another chance to prove himself as he would have the honor of facing Ken Anderson later in the night.

The first round of the 2015 King of New York tournament was reset to two first round 5-man elimination matches with the final two battling in the main event.

This match could have been bad fast for Mister AO, who bragged about how he would win and how he was better than everyone, which ired up the monster inside Ahtu, who fed him to the other competitors.  The first two eliminations came at the same time after non-stop action inside and outside the ring kept the excitement high.  Ahtu annihilated both Fighter Cat and Mister AO, then pinned them together, for the win.  The next elimination came with Santi and Cooley K were battling on the top turnbuckle. Cooley K won the battle, but Santi won the war when he caught a flying K in a spinebuster.  The final elimination came after Ahtu went for his swinging spinebuster slam, Santi countered, but ended right back into that swing, slammed to the mat for the elimination.

Fans were on their feet for this one as from the bell, these two shifted into overdrive.  The Church took the lead up front with total domination of the champions as Graves and Tibbs were dissecting Steve.  One he made the tag, the champions came back into control, keeping Graves at bay.  A miscue outside the ring turned things around, seemingly in the favor of the Church, as Steve dove outside the ring, thinking he would hit Dorian Graves, but instead dove into his partner!  Tibbs wanted to join the party so he flew over the top and knocked both Down Boyz down!  With Graves back in the ring and the momentum starting to change, ConfluxXx came out and attacked Tibbs while he was outside, leaving him unable to help Graves, who was double teamed with the Down Boyz connecting their Doomsday Dropkick to retain the titles.

As the announcements were made for Mr. Anderson by ring announcer John E Radioo, VsK snuck out the ring and through the crowd, grabbed a chair, and attacked Anderson from behind, brutalizing him before the match had begun.  Finally shoving a limp Anderson into the ring, VsK casually covered the 2-time TNA World Champion for the easy three to pick up the first fall.

After referee Steven checked on both competitors, he restarted the match for the second fall.  VsK went for another casual cover, but did not get it.  A frustrated VsK then went to work, dissecting Anderson, looking to prove to VPW Commissioner EJ Risk that he deserved his title shot and that he would do anything he had to to prove it. Anderson was able to pick up the second fall to even the fall count, and make things interesting.

Anderson, who until that point had been fighting to survive, finally started getting into the match.  This didn’t stop VsK, who did everything he could to try to bring down Anderson, even countering Anderson’s Mic Check finisher.  Anderson’s second attempt was successful, however, as he picked up the win.

In one corner, you have the 260 powerhouse monster Ahtu.  In the other, the former New York State champion Kai Katana, one of the more dominant superstars to wrestle in VPW.  Would the sheer power overcome Katana’s experience, or would he find a way to outwrestle Ahtu?  With the chance to be number one contender at the 9 year anniversary show on the line, this was a nightmare scenario for Ricky Reyes, as both would pose a serious threat to his championship.

Ahtu came as advertised: big, strong, and dominant.  But Katana was able to break down his opponent’s strength and weaknesses, looking to add a second VPW trophy accomplishment to his accolades.  The struggle continued but in the end, it was Katana that scored the win. 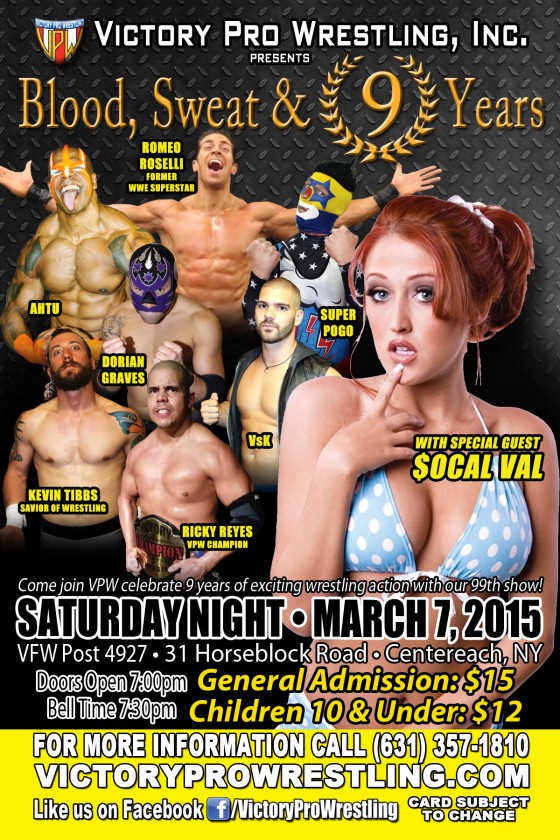