The first time they met was at the Gold Rush Rumble, when Mr. O.A. made his Victory Pro Wrestling debut. A month later, “Firebird” Jorge Santi and Mr. O.A. met again, this time in a triple threat match with Dr. Lamar Braxton Porter.

But it was at Autumn Uproar where we really saw a side to Mr. O.A. that we had not seen before.

In his first singles match, the cool cat from the Other Side of the Tracks brought a heavy with him to the ring in the form of Big Koz. We don’t know much about him, but his size alone was intimidating.

Big Koz’s presence alone could have been enough to give Mr. O.A. the advantage against Manhattan’s Santi psychologically, as nobody knows anything about him. 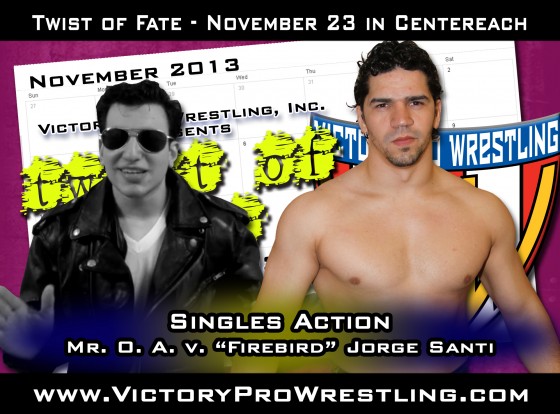 Santi’s experience did bring him close to victory, but Mr. O.A. showed a little slickness with a cheap roll-up to steal the win.

Furious at the loss against the VPW newcomer, the Firebird demanded a rematch, and at “Twist of Fate,” Saturday night November 23 in Centereach, Santi and Mr. O.A. meet again.

Will Santi rise above his opponent, or is Mr. O.A. too cool to lose?

And what role will Big Koz play?