Full results are in from “2012 Gold Rush Rumble” in Centereach!

As the show was about to start and the ring announcer was going to introduce the first match of the evening, VPW Champion Kevin MISTER Tibbs interrupted the show.  He said that even though he is the Victory Pro Wrestling Champion, he’s going to enter for two reasons.  First, to make sure VsK doesn’t win.  Second, he was going to ensure that he would be the first ever double champion.

The 2012 Gold Rush Rumble
First, the rules:
Two wrestlers start the match.  Every 90 seconds another VPW wrestling comes to the ring.  Wrestlers would be eliminated once they were thrown over the top rope and both feet touch the floor.  The Rumble ends when there are four wrestlers left, who then go on to finish in the main event to determine the winner.

Special notes from the Rumble:
• This was the largest Gold Rush Rumble in VPW History, with a total of 29 entrants.
• Jacob Hendrix’s record for shortest time in the Gold Rush Rumble was in jeopardy when Mikey Old School was eliminated.  He lasted 2 seconds, 1 second longer than Hendrix last year.
• Kevin MISTER Tibbs never actually got inside the ring.  Instead, the VPW Champion stalked outside the ring before VsK was announced, then ran from his former best friend until VsK finally entered the ring.

The final four was determined when Roselli was almost eliminated by Fulton.  Tibbs, from the outside, kept the Heartthrob from being eliminated, even helping him back in the ring.  But Fulton took Roselli, brought him to the other side of the ring, and eliminated him.  The final four in the match were Tibbs, who after Roselli was eliminated, entered the ring to claim the final spot; VsK, Kai Katana, and Kevin Fulton.

Risky Business
VPW’s King of New York EJ Risk came to the ring after intermission with Jay Delta and Xander Page to debut the first ever “Risky Business”, a talk show hosted by the Flushing, Queens native.  After he was done bragging about his accolades, including being the first, and only, VPW King of New York, winning both 2011 and 2012 tournaments, being one half of the current Victory Pro Wrestling Tag Team Champions, he turned his attention on Johnny V, his first guest.

Once Johnny V came to the ring, EJ asked him what right he had to put his hands on him during the Rumble.  After a verbal beatdown by Risk, Johnny V looked at Risk’s crown, Risk’s title, and told him that he would look pretty good with it.

The Heartthrob Romeo Roselli d. Johnny Armani (w/ Mikey Old School)
Roselli came to the ring, then told the crowd that he was very angry that he was eliminated from the Gold Rush Rumble, claiming it was done illegally.  He said that when he gets angry, people get hurt.  When he gets real angry, people get real hurt.  Johnny Armani came to the ring, and the two battled.  Roselli, frustrated from being eliminated earlier in the evening, overcame the challenge from Armani to pick up the win.

2012 Gold Rush Rumble Four-Corners Elimination Finals
K-Fresh Kevin Fulton d. Kevin MISTER Tibbs, VsK, and Kai Katana.
Tibbs trash talked once the bell rang, telling VsK that he would eliminate him and never grant him another title shot again.  VsK’s response: A super kick to knock the VPW Champion out and a cover to score the three count, eliminating the self-proclaimed “Savior of Wrestling” from the match.  Fresh and VsK tried to dominate Kai Katana but the mysterious man from the Pacific Islands was unstoppable.  The prophecy of VsK eliminating Katana fell apart, as Katana was able to eliminate him. 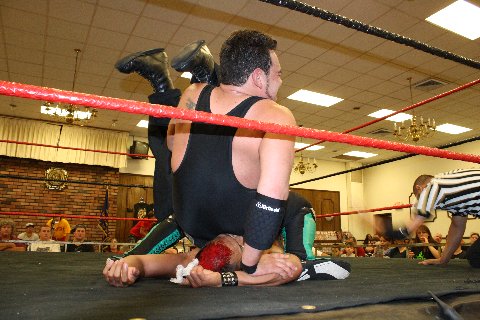 The New York State Champion faced one of the toughest challenges in his career, first lasting as long as he did in the Gold Rush Rumble match after drawing the #1 entrant, and now the dominating unknown force of Katana.  Against all odds, he hit the Freshmaker and covered Kai to pick up the win and become the Gold Rush Rumble winner.

Kevin MISTER Tibbs then came out and celebrated with his best friend.  He then told the fans that it would be great if next month, Tibbs and Fresh would reunite the Funky Fresh Boyz and go after ConfluxXx for the Victory Pro Wrestling Tag Team Championships.

Fulton, however, had other plans.  He told Tibbs that yes, they were friends.  Yes, he would always have his back.  But with his recent attitude, that back of Tibbs had a target, one that Fulton was now aiming for.  Saturday night September 22, he said that he would challenge Tibbs for the Victory Pro Wrestling championship and be the first ever VPW Triple Crown champion.

Tibbs, a little upset, then hit Fulton with the title.  VsK came out to make the save, then grabbed the mic.  VsK, frustrated with Kai Katana involving himself in everything VsK lately, said that next month in Deer Park, not only will Fulton face Tibbs for the VPW Championship, but he would settle things once and for all as VsK and Kai Katana would go one-on-one inside a steel cage.