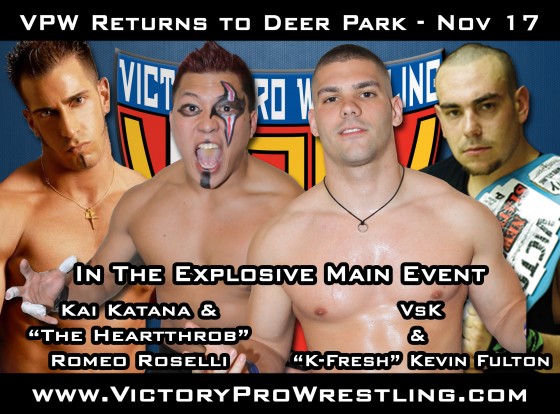 Two things happened May 11 at Islip High School.  The first was the debut of the Asian Assassin Kai Katana.  In an impressive debut, Katana was able to score a victory against “Second to None” Alex Anthony.  The second was the return of “The Heartthrob” Romeo Roselli to Victory Pro Wrestling after a two year absence in an impressive match against “Firebird” Jorge Santi.

Katana’s path started with an unknown obsession with VsK.  Interfering in matches, and even pinning him in the 2012 Gold Rush Rumble to eliminate him, Katana has been a thorn in VsK’s side.

On the other side, Roselli’s obsession wasn’t for “K-Fresh” as much as it has been for the New York State Championship he wears around his waist.

And Fulton?  He’s having the time of his life.  The former VPW Tag Team Champion currently holds the New York State title, and has taken on all comers.  “I don’t care who it is, I will face anyone and I will defend this title, and when it’s all said and done,” Fulton said, “I will still be the VPW New York State Champion!”

However, he may also be looking at higher aspirations.  He lasted longer than anyone else in the history of the VPW Gold Rush Rumble and he’ survived the fatal four way elimination match to win the Gold Rush Rumble, giving him a chance to face any champion he wants, and he’s set his sights on the VPW Championship.

Will the silent Katana and arrogant Roselli be able to work together?  Will the friendship between VsK and K-Fresh be enough to rise above their opponents?  Or will their thoughts about becoming VPW Champion cloud their vision and be the distraction needed for The Heartthrob and Asian Assassin to steal the win?