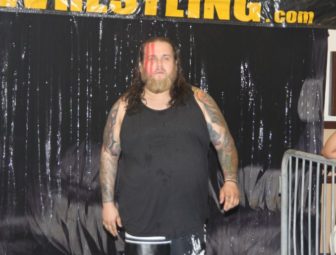 Fans were shocked when The Devil’s Outlaw’s music played.  Could it be?  Was this happening?

The Giant Andre eliminated Stockade, but it wasn’t easy.  Stockade smiled when he saw the 6’7″ monster approach the ring.

And at Carnage in Centereach 12, Stockade is coming back for more.

What will happen when VPW returns to Centereach for Carnage in Centereach 12?

VPW CHAMPIONSHIP
Mister Tibbs won the 2018 Gold Rush Rumble. Will he challenge VPW Champion EJ Risk, or will he make the Forgotten one wait?

VPW WOMEN’S CHAMPIONSHIP
The Women’s division is starting to heat up with Karen Bam Bam returning from the Queen of New York tournament, Ariela Nyx making her debut, and Eris Rayne showing she’s more than just a manager.  What does this mean for VPW Women’s Champion Kris Stadtlander?