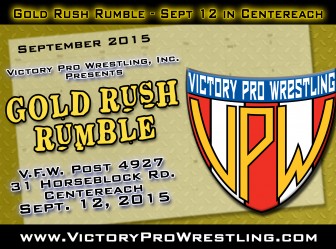 Returning to Centereach is the Gold Rush Rumble, one of the most unpredictable and incredible matches in Victory Pro Wrestling.

Stars were born from this contest, paths were paved, and champions were decided.

From determining who was the New York State Champion to giving the winner the chance to choose who they want to challenge, the Gold Rush Rumble has never disappointed.

Ricky Reyes, VsK, Kevin Fulton, Jorge Santi.  These are just some of the names to be etched in the Gold Rush Rumble history, a challenge that is harder than it looks.

The winner of the Gold Rush Rumble has to go through two matches and at least 20 different VPW superstars, which makes this match very unpredictable. The first match is a gauntlet style over-the-top rope battle royal.  The final four competitors then met later on that night in a Fatal Four Way match to determine the ultimate survivor and the Gold Rush Rumble winner.

One of the surprise factors is who is actually competing.  With the chance to be a champion in Victory Pro Wrestling, superstars come from all over to be a part of this match.

Stars from around the world have come to compete, but it’s also a perfect chance for newcomers to Victory Pro Wrestling to come in and steal the show, but would they be able to overcome the odds of outlasting seasoned VPW superstars? 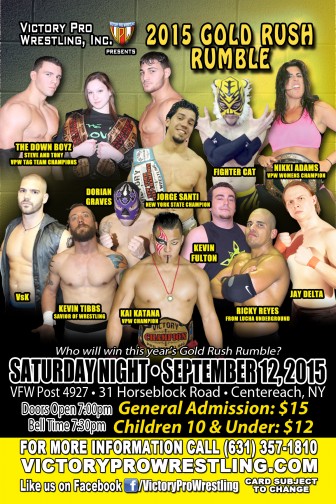 What will happen at
the Gold Rush Rumble?