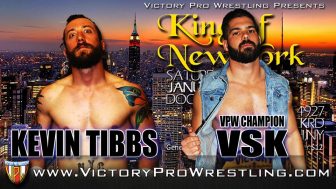 Kevin Tibbs was scheduled to challenge VSK for the VPW Championship at Victory Pro Wrestling’s show in October, but was unable to show up as he was welcoming the newest member to the Church of Tibbs, his new child.

However, all bets are off when the Savior of Wrestling meets VSK at the 2018 King of New York tournament.

When these two gladiators finally square off, it is very likely that a new champion may be crowned.  Of course, VSK has a little extra help in his corner with his best friend EJ Risk by his side.  Any advantage Tibbs may have could be negated by Risk.

Who will walk away from the King of New York as VPW Champion?