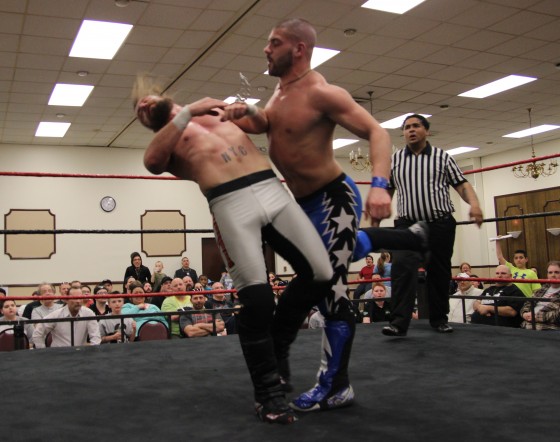 The long awaited championship match between VsK and Kevin Tibbs came to an awkward conclusion costing the champion the match and leading to a request from VsK to the fans in Centereach: “Put us in a cage.”

The show started in Centereach in front of a full house of wrestling fans with ring announcer John E Radioo getting the fans excited for the main event.  As he was starting to run down the rest of the card, ConfluxXx came down to the ring and interrupted him 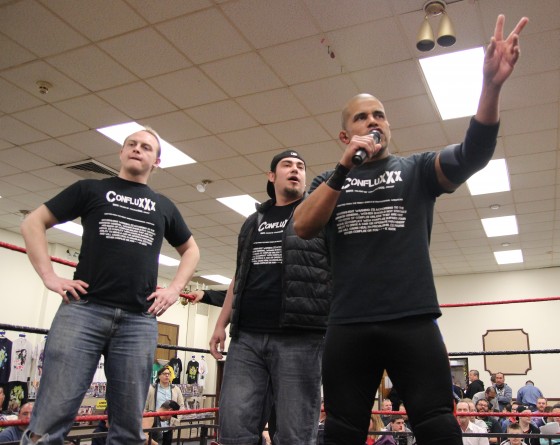 Flanked by Jay Delta and Ricky Reyes, new member Kevin Fulton told the fans that he was sick and tired of his real friends never being there when he needed them.  “Where was VsK?  Where was EJ Risk?” he asked the fans.  “Instead of my friends, I get Razzle freakin’ Dazzle and Super freakin’ Pogo!”

Pointing to his ConfluxXx stablemates, Fulton continued: “These are not my friends, these are my brothers.” He told the Centereach crowd he was sick and tired of being their good soldier, and that it was time to do things for Kevin Fulton.

Reyes then announced that tonight, EJ Risk was not there.  “The reason why he wasn’t in Centereach was because he was scared of Ricky Reyes.”  He then said he was going to issue an open challenge to anyone in the locker room to challenge him tonight instead.

After suffering a loss against masked newcomer Mascaras Celestial at Blood Sweat & 8 Years, Destructico was ready for revenge, and he was going to take it out on anyone that would be placed in front of him.

Super Pogo! was able to mount a strong offense and get the crowd behind him, and several times looked close to picking up the win, but the experience of Destructico helped him score the victory.

In a battle between the masked disciple of the Church of Tibbs and Manhattan’s son Jorge Santi, it was all about power.  Dorian Graves was strong to start, but his off color style distracted himself at times instead of his opponent.

Santi struck back, using his speed and strength to open up an offensive strike for the win, but outside distractions from Jacob Hendrix seemed to be too much for the Firebird.

With Hendrix holding Santi on the ropes, Graves looked to seal the deal with a big boot, but Santi moved out of the way, knocking Hendrix down to the floor.  Santi rolled up Graves to pick up the win. 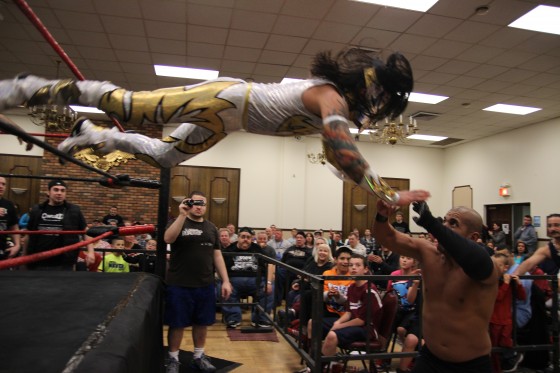 The masked newcomer to Victory Pro Wrestling answered Reyes’ open challenge from earlier in the night, which pit the luchador style of high flying wrestling against the ConfluxXx leader.

Grabbing the microphone from the ring announcer, Fulton and Delta stayed at ringside, providing live “commentary” during the match for the fans in Centereach.

Celestial proved that he could definitely hang with Reyes, dazzling the former New York State champion with incredible moves and wowing the fans, but Reyes finally picked him off with the brainbuster to score the win.

Bringing guitars to the ring, The Down Boyz told the fans they were here to show why rock is better than hip hop and why they were better than Da Hou$e Party.  After attacking the champs at Blood Sweat & 8 Years, this was their chance to put up or shut up.

The champions did not forget what happened, and this match was a pure fight.  Both teams went back and forth showing supremacy in the match, but it was the experience of Da Hou$e Party that lead them to the win.

As they were celebrating the win, Tony and Steve attacked Da Hou$e Party.  Able to hold them off again, running the Down Boyz out of the ring, K-MC grabbed the mic and said they were open to a rematch at the Fans Choice Show V, Saturday May 3 in Deer Park. 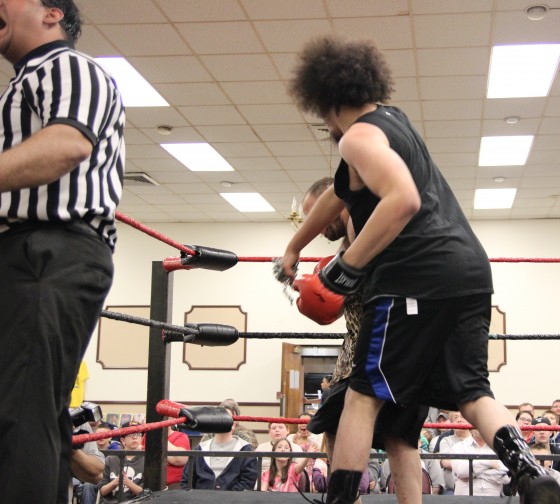 This special attraction match was a three two-minute round match featuring the unorthodox Grop against Jacob Hendrix.  As the referee was trying to get them in the middle of the ring to start the match, Hendrix took his gloves off and offered his friendship to Grop.  Stunned, the caveman looked to the fans for advice, and received a slap to the face from Hendrix.

Finally getting control, the match finally started.  The first round was… ugly.  The wild swings of the caveman, who came to the ring wearing his gloves on the wrong hands, was enough to stagger Hendrix, but the tall disciple of the Church of Tibbs was able to keep the flurries at bay.

Before the second round started, Hendrix threw a chair at Grop, causing the caveman to go wild and unlock a scary, angry beast.  As the bell rang, Grop showed he was ready to win the fight and end Jacob Hendrix’ career, but with a distraction from Tibbs, Graves pulled a really, really, really long chain from his shorts and tossed it to Hendrix, who wrapped the chain around his fist to knock Grop out.  Without the official seeing the chain, he counted Grop out for the count.

After the match, Kevin Tibbs told the fans that this was a sign of things to come, and that later on he would take the VPW Championship from VsK because like Grop, VsK has no friends to watch his back except for the fans.

The object of the Big Koz Challenge is to bodyslam Big Koz.  The winner gets $500.  To date, nobody has been able to bodyslam the 400-pound behemoth.

Looking to the crowd, Big Koz chose a fan, Nick, to go for the Big Koz Challenge.  He was very excited for his chance to win $500, but he struggled to lift Big Koz, unable to do so.  Something snapped, and Big Koz attacked the fan, throwing him around the ring like a rag doll.  He looked to set the fan up for a running avalanche in the corner when Mister Freedom came out to make the save.

The fan was able to escape, but Mister Freedom was not, and suffered a Big Koz Splash for his troubles.

He was frustrated that he would have to face Razzle Dazzle, so he took that frustration out on Dazzle.

Dazzle was able to mount a strong offense, but he was unable to take the big man down, even after his Head, Shoulders, Knees and Toes sequence.

Big Koz ran in the corner looking to squash Dazzle with an avalanche, but Dazzle moved out of the way.  He dropped to his knees and Big Koz toppled backwards. Hooking both legs, Razzle Dazzle picked up the unlikely win! 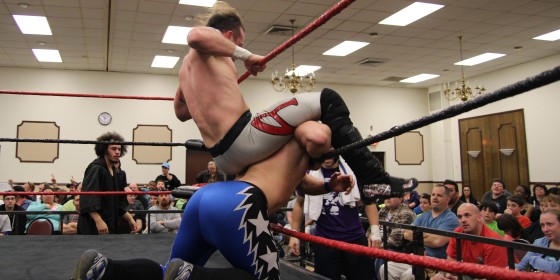 Tibbs earned his title shot after winning the 2014 King of New York tournament earlier this year.  The former champion, 13 months prior, declared earlier in the night that he would be the first two-time VPW Champion.

VsK, the man who took the championship from Tibbs, was ready for everything Tibbs could bring to the table.  The former best friends showed all the times together as friends and all the times they’ve faced each other in the ring proved to be problematic, as they knew each other so well they were able to counter each other’s big moves.

Things finally looked problematic for the champion when out of nowhere, Kevin Tibbs hit VsK’s finisher – the super kick – on VsK!  Fans were shocked and thought the title was about to change hands, but  that was not the case.

Now, frustration started to show as desperation flowed through the Church of Tibbs’ camp. Jacob Hendrix distracted the official as Dorian Graves once again pulled the really, really, really long chain from his shorts and tossed it to Kevin Tibbs.

This time, VsK was able to take the chain, wrap it around his fist, and knock Kevin Tibbs out.  Unlike in the Hendrix/Grop fight, the official did see the rule break and disqualified VsK.

While VsK did lose the match, titles cannot change hands by disqualification.  Hendrix and Graves attacked VsK, but both ate super kicks from the champion.

With the fans strangely against VsK, leading a “You’re a cheater” chant, VsK pleaded with the fans to grant him one wish – a steel cage match so he and Kevin Tibbs can go one-on-one without outside interference and so he can prove that he is the best wrestler in Victory Pro Wrestling.