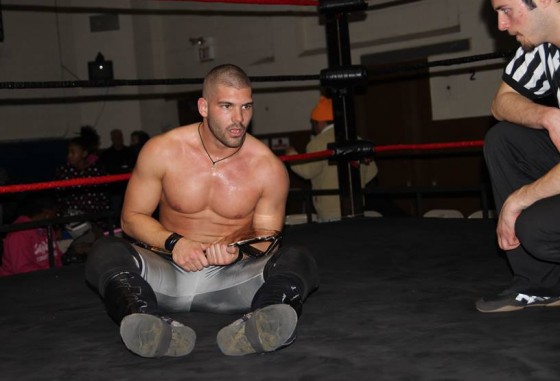 At December Devastation, Ricky Reyes pinned VsK. But at the end of the night, it was VsK claiming to be the undisputed champion in VPW.

NEW YORK STATE CHAMPIONSHIP
Kai Katana (c) against EJ Risk
After feeling he was cheated – not once, but twice – and then defending Brian XL after he felt XL was cheated, EJ Risk got the chance to right the wrongs of the Asian assassin Kai Katana and take the New York State championship from him.  In a hard fought match, all signs pointed to a new champion, but once the battle went outside, a determined but beaten Katana kept EJ from returning to the ring, causing both men to be counted out.

The battered champion slipped away to the back, and a frustrated Risk was not happy with the results.

Mr. O.A. came out next with his hired muscle Big Koz for another “Big Koz Challenge.”  Once again, they offered $500 to anyone that could body slam Big Koz.

Mr. O.A. and Big Koz were pretty happy about what they did, and even opened up the challenge for anyone in the back to face Big Koz in his debut match, right there and then.  He challenged any clown to come out to face Koz.

And that’s when Super Pogo!, along with Mikey Old School and Razzle Dazzle, came out to accept that challenge.

Big Koz (w/ Mr. O.A.) against Super Pogo! (w/ Mikey Old School and Razzle Dazzle)
Pogo! didn’t really know what to make of his opponent, other than he was big and new.  His experience wasn’t enough to overcome the newcomer’s pure brute power and size.

Even with his tag partner Dazzle and manager Old School outside to support him, Pogo! also fell victim to the Big Koz Splash.

K-Fresh Kevin Fulton came out to the ring next in crutches, and he explained to the fans that at last month’s show, Kevin Tibbs and his Church of Tibbs brutally attacked him and his Super Best Friends partners.  In that attack, they tore his ACL, and that according to the doctors, Fulton was out indefinitely.

Mr. O.A. (w/ Big Koz) against Cooley K
Hoping to capitalize on his muscle’s dominating performance earlier, Mr. O.A. faced one half of the VPW Tag Team Champions.  In a clash of the 60s against the 80s, O.A. had a hard time keeping up with Cooley K.

Primarily a tag team wrestler, Cooley K fare quite well for himself, even with Big Koz outside trying to cause a distraction.  In the end, Cooley K picked up the win with a top rope facebuster.

After the match, Cooley K entertained the fans as Mr. O.A. looked stunned at taking another loss.

Church of Tibbs (Dorian Graves/Kevin Tibbs w/ Jacob Hendrix)
against House of Glory (Brian XL/Amazing Red)
This match had potential show-stealer written all over it, and they turned it up even more after the bell started.

About 5 minutes into the match, things spilled outside the ring, then into the crowd.  One one half of the center, Tibbs was throwing merchandise over Amazing Red.  On the other half, Brian XL was throwing Dorian Graves into the seats at ringside.

The match end up back in the ring and after an amazing kick/TKO combination from Graves and Tibbs, somehow Red and XL came back and picked up the victory.

After the match, Kevin Tibbs hoped he’d get his hands on Amazing Red and Brian XL next month when Victory Pro Wrestling presents the 2014 King of New York at the Deer Park Community Center on January 25, and he promised that he would eliminate them both.

Jacob Hendrix (w/ Kevin Tibbs and Dorian Graves) against “Firebird” Jorge Santi
Frustrated that his team lost earlier in the night, Kevin Tibbs came out to see his disciple pick up the win against the Big Apple native.

While his experience gave Santi the advantage, Hendrix was able to mount an offense with Tibbs and Graves coaching him on.

In the end, though, it was Santi picking up the win.

Before the main event, ring announcer John E Radioo thanked the fans that braved the weather to join us in our final show of the year.  He also noted that he was just informed that at  the 2014 King of New York at the Deer Park Community Center on January 25, the winner would not only be crowned King of New York, but would also get a title shot at the 8 year anniversary show in March of 2014.

30 MINUTE IRON MAN MATCH
VICTORY PRO WRESTLING CHAMPIONSHIP
Ricky Reyes against VsK (c)
With Ricky being unable to beat VsK for the title on two separate occasions, it was time to put up or shut up for the Cuban Crippler.  For VsK, it was a chance to prove, once and for all, that he was in fact able to beat Ricky Reyes, despite losing the New York State and VPW Tag Team Championships to Reyes.

The action spilled outside but most of the competition took place in the ring, and it took almost 18 minutes for Ricky Reyes to score the first fall of the match.  With Reyes in the drivers seat, VsK needed to score at least one fall to tie the match or lose the title.

Frustrated by being unable to pick up a second fall on VsK, a mistake Reyes made cost him, with VsK able to kick a super kick to score the pin.

With about 6 minutes left, things looked more and more like a possible sudden death overtime until with just 4 seconds left, VsK scored the third fall of the night, and with the buzzer going off, VsK with 2 pinfalls to Reyes’ 1 pinfall left him in the ring exhausted, but still Victory Pro Wrestling champion.