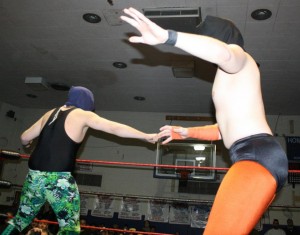 Victory Pro Wrestling fans chose Jay Delta to challenge “K-Fresh” Kevin Fulton at the 2012 Fans’ Choice show for the VPW New York State Championship, and they chose the match to be fought with both competitors wearing blindfolds.

This was not the first time Fulton and Delta faced each other, and it’s not the first time a title was on the line.  As one half of Victory Pro Wrestling’s most dominant tag team Eclipse, Delta has been opposite “K-Fresh” and the Funky Fresh Boyz for the VPW Tag Team Championship.

To say both wrestlers are familiar with each other is an understatement, but with blindfolds on, history meant nothing.  If you cannot see your opponent, you cannot anticipate their moves and put up a proper defense. 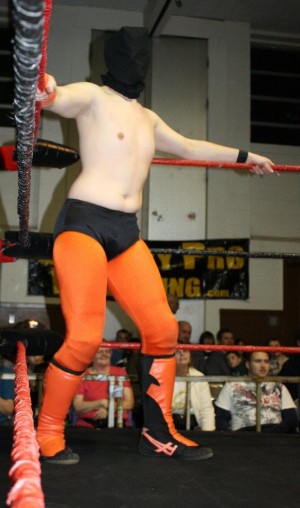 With that in mind, one can say that both Delta and Fulton faced a unique battle in Deer Park.  Eventually, the fans were able to assist “K-Fresh” by guiding the New York State Champion to where Delta lay in wait, and moments later he was able to make the Conflux member tap out.

So when the show’s intermission was over and the ring announcer was about to start the second half of the show, it wasn’t really a surprise to see the frustrated Delta storm the ring, grab the microphone, and challenge “K-Fresh” to another match in Centereach at VPW’s 6 Year Anniversary show.  Complaining about how unfair it was, he demanded a rematch, one that VPW officials were quick to grant.

But who can this really benefit?  Fulton said there was no way Delta would walk away as New York State champion, but can he hold off a challenge without the blindfold?  Delta said, “I’m the better wrestler, but let’s be real about this.  Without those morons distracting me and cheating for ‘K-Fat’, I’d be the New York State Champion right now!  And Saturday night, March 10, that’s when Conflux takes back what’s ours.”

“First,” he continued, “I will bring the New York State Championship back home, and then ‘The Cuban Crippler’ Ricky Reyes and King EJ Risk will bring back the tag gold.”

“And just like Ricky keeps telling you morons,” added Delta, “Conflux always has a game plan.  And at the VPW 6 Year Anniversary show, everything will be crystal clear.”

Victory Pro Wrestling returns to Centereach Saturday March 10
Tickets are $15 General Admission, $12 for Kids 10 and under
Click here to find out more about our 6 Year Anniversary Show →