Be careful what you wish for: Church of Tibbs to face VsK and AJ Styles in Deer Park 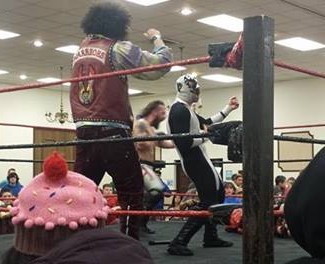 His preaching has earned him some followers in Jacob Hendrix and the masked Dorian Graves.  With their undying loyalty and support, Tibbs continued to complain about how he is the best and that everyone will see when he finally gets his hands on the Victory Pro Wrestling championship.

Tibbs’ preaching has come at a cost.  He’s fought his former best friend and tag team partner “K-Fresh” Kevin Fulton, tearing the friendship apart more and more.  His self-righteous leadership of the “Church of Tibbs” drew the ire of “Man of Faith” Brian XL and Amazing Red.

His attack of Amazing Red at “Before the Storm” and his challenge to anyone, including VPW’s special guest at the “Blood Sweat & 8 Years” anniversary show The Phenomenal One AJ Styles may have been more than he can handle. 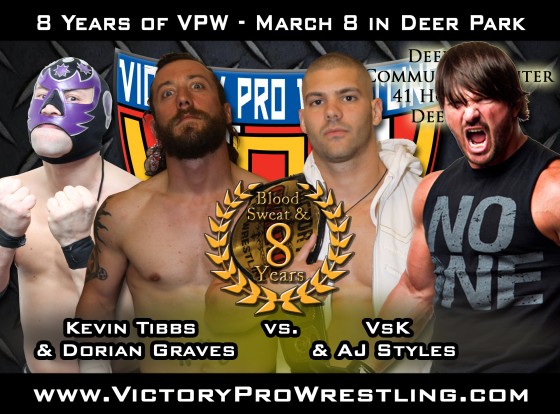 The five time World Heavyweight champion comes to Deer Park as our special guest, but this may be a personal mission of retribution for the Phenomenal One.

In 2003, he teamed with Amazing Red to become the second ever Ring of Honor World Tag Team Champions, a championship also held by Austin Aries, CM Punk, and Ricky Reyes.

Red and Styles have fought in the past for the TNA X-Division championship, but have always maintained a strong friendship that is surely going to come into play March 8.

Kevin Tibbs can talk a good game.  He is an opportunist that can back up his words, as he has time and time again, most recently by becoming the 2014 King of New York and earning a title shot for the Victory Pro Wrestling championship.

Can VsK and AJ Styles together shut down the pulpit of the Church of Tibbs or will the Savior of Wrestling and his masked disciple find a weakness to capitalize on?