BREAKING NEWS: Delta to get rematch against Steve Gibki at VPW: 125 and Counting 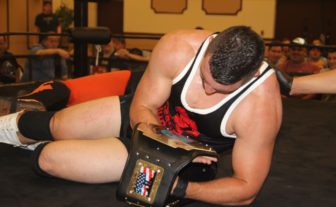 Jay Delta had nothing but complaints after losing the New York State Championship to Steve Gibki.

“How is that even possible,” Delta asked in the locker room after the match. “He’s from New Jersey!”

New VPW Commissioner Kevin Fulton, who has also been the muscle, mouth, and agent of ConfluxXx until Upper Limits, announced that his best friend and former ConfluxXx partner will get a rematch against the new champion at VPW: 125 and Counting.

“While there are some that will find my decision self-serving, I want everyone to know this is what is truly best for them,” Fulton said. “You’re welcome.”

Gibki, fresh off a tour of England, came back to VPW and became the New York State champion after earning his opportunity in March. Will his victory be short lived, or will Gibki prove he is more than just muscle?