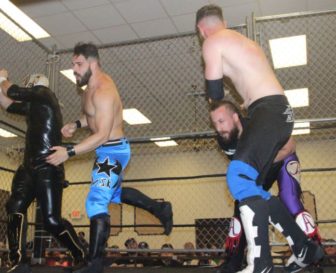 Victory Pro Wrestling Champion VsK and The Forgotten EJ Risk have a twisted story to tell about their experiences inside the confines of a 15-foot high Steel Cage. In the first ever cage match in VPW, EJ Risk and VsK stood across from each other in a Steel Cage Survival match. VsK’s team came out on top in 2011.

VsK has gone on to compete inside the cage three more times. His overall record is 2-2, and in singles competition he is 1-1. In fact, VsK’s last singles match inside a cage was a title match, where he lost the VPW Championship to Kevin Tibbs in 2014.

EJ Risk, on the other hand, did not compete in another steel cage match until just last year. Overall, he is 0-2 inside the cage. What makes that match significant is that his partner was his best friend VsK, who he will challenge for the Victory Pro Wrestling championship at VPW: 125 and Counting.

As it was in 2011, it will be EJ Risk on one side, and VsK on the other. Will VsK continue his reign as VPW Champion, or will EJ Risk rise to the top and take back what he feels is rightfully his?