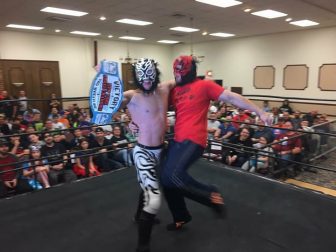 They say that cats have nine lives.  It’s possible that Fighter Cat’s count is at 8 and a half.

At VPW’s October show in Centereach, Fighter Cat welcomes a fan dressed up as him to the ring for photos.  Turned out, the fan was none other than Jay Delta, who has his sights set on becoming VPW New York State champion and joining the elite Triple Crown club.

The beatdown Delta gave to Fighter Cat was a shock, and may be just foreshadowing the end of the longest New York Championship reign when Fighter Cat defends the title against Jay Delta.

This won’t stop Fighter Cat, who accepted Jay Delta’s challenge and has “meowed” to defend the championship.

Has Fighter Cat finally run out of lives, or will he be able to overcome the Conflux challenge that awaits him?