Can the Firebird rise to New York State title against new champ Katana? 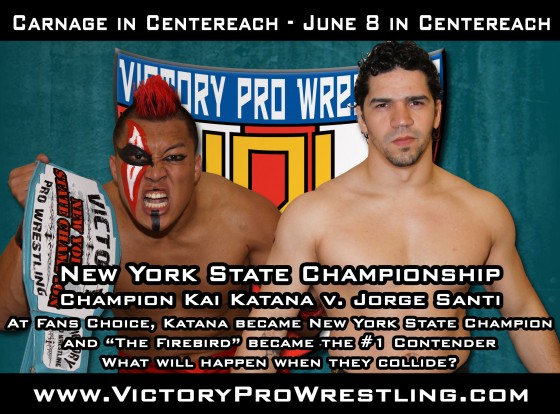 May 11, 2012.  That’s the day that Kai Katana made his VPW debut, in front of an audience at Islip High School.

One day later, he made his debut at the Deer Park Community Center against “Firebird” Jorge Santi.  Like in his first match, Katana was both impressive and successful.

The paths they both took a year earlier, Katana dominating the scene, and Santi looking to regain ground, both lead to Carnage in Centereach VIII, but will the result still be the same?

Santi has continued to grow, gaining wins quietly and waiting for the right chance to strike.  Katana has also grown, but with more fanfare, making it to the main event of the Gold Rush Rumble, and facing VsK inside a 15-foot high steel cage.

A new, young, hungry Katana was the hunter, but a year later he is now the hunted.  Can he make the transition and prove that he is a champion, or will Santi avenge his loss from a year ago and rise above the challenge to become the next New York State champion?